VR Technology: Everything About Virtual Technology And How It Works

As humans continue to integrate technology more into their lives, the widespread use of VR technology has blossomed. By donning goggles and utilizing motion devices, people can easily interact with projected images and immerse themselves in richly developed virtual environments.

VR technology may seem like something straight out of a science fiction novel. However, today the use of virtual reality headsets and other devices is a real and present phenomenon.

Thanks to both the creation of virtual reality and augmented reality, it is more common for people of all ages to enjoy playing online games, learn new skills, or even enjoy shopping for items.

As the technology behind virtual reality continues to become more refined, people can readily slip into virtual worlds with the assistance of a headset and their smartphone. Over time, the developers of many devices that connect to virtual reality have worked to make headwear less bulky, smoother crisper graphics, and have made the price point more accessible.

Devices such as the HTC Vive and its touch controllers have allowed users the world over to enjoy jumping into a  virtual world, playing games, and marveling at the experience.

The use of VR technology is not only limited to entertainment purposes, as companies see the benefits of being able to train workers, and there is also room for medical applications.

The existence and conceptualization of virtual reality have existed for longer than you may realize.

Following the creation of such objects such as the stereoscope, flight simulators, and the View-Master, people have been fascinated with the capability to be immersed in fanciful and fantastic worlds.

In the 1960s, Morton Heilig was credited with the development of gear that was worn on the head. Nearly ten years later, Ivan Sutherland and Bob Sproull were experimenting with connecting headgear to a computer display instead of a camera.

Coined ‘The Sword of Damocles,' users who donned the pairs bulky headgear were treated to a visual display of pixelated rudimentary computer generated graphics.

The concept of VR technology has been around since the 1800s, as Jaron Lanier was hard at work tinkering with gloves and goggles that allowed a user to experience some form of VR.

Eventually, the passion of gamers helped propel the use and quality of virtual reality technology ever forward. In the 1990s, excited gamers were introduced to interacting with familiar video games while wearing a headpiece. SEGA created was when the started building VR glasses, but the idea unfortunately never came to fruition on the market.

One reason that early virtual reality technology seemed so out of touch despite good intentions was the fact that the gear was expensive, bulky, and not accessible enough for a large number of gamers. Plus, the graphics and equipment required for VR gaming still had a long way to go.

Thanks to the development and proliferation of smartphone usage, smaller and more powerful computers are making VR technology a more feasible and accessible option for many.

With a powerful PC, smartphone, and attached gear such as a headset and motion-sensors, users can step foot into virtual worlds more readily for gaming, shopping, or exploring various territories.

Weighing The Pros And Cons Of VR Technology

Virtual reality technology has created some disruption in our everyday lives. As the price point and accessibility for VR gear increases, and consumer demand increases, there may be a long-lasting impact on our society.

Younger generations, such as Generation Z are a massive influence for the success of VR tech, as businesses seek to take advantage of creating public spaces for gaming, and VR gear use. VR technology is increasingly being adopted for commercial purposes, as stores compete for customers attention and dollars.

Here are a few Pros and Cons about Virtual Reality worth considering.

Whenever a new technology becomes embraced by larger society, there are looming fears about how it will influence human behavior. People do have reason to be concerned about any unforeseen long-lasting ill health effects from prolonged use of VR tech.

Plus, since VR tech often requires constant monitoring, adjustment, and collection of various types of data to function and optimize performance, people have voiced concerns about privacy.

Regarding various health problems related to the use of VR, users may suffer from occasional feelings of dizziness, lightheadedness, nausea, or have eye strain.

Many companies that develop VR gear and applications advise users to take a 10 to 15-minute break for every 30 minutes of VR gear use. And unfortunately, for gamers or VR users who are heavily addicted to immersing themselves in virtual spaces, they may suffer more severe health problems if they do not heed sensible warnings.

Room For Development And Growth

Depending on any previous experiences with prototypes of VR gear, you may have been impressed or yawning over the graphics, sound quality, and overall experience. The quality of the graphics for many VR games and applications still has a long way to go to become cleaner, sharper, and more vivid in detail.

The resolution for some of the videos viewed through VR tech may look a bit pixelated, cloudy, or are difficult to see through comfortably without triggering nausea or eye strain.

Socially, some people have voiced concern about how addicted VR users may prefer to avoid real-world interactions, in lieu of staying plugged in as long as possible to VR applications.

The lack of an ability to comfortably adjust and switch between the virtual world, and the actual real world, may lead to increased social breakdowns and dysfunction between people and their ability to relate to other people.

The development of countermeasures to prevent social breakdowns, address addiction and lessen physical health problems from prolonged VR use still need to be worked out.

Virtual Reality Is Here To Stay 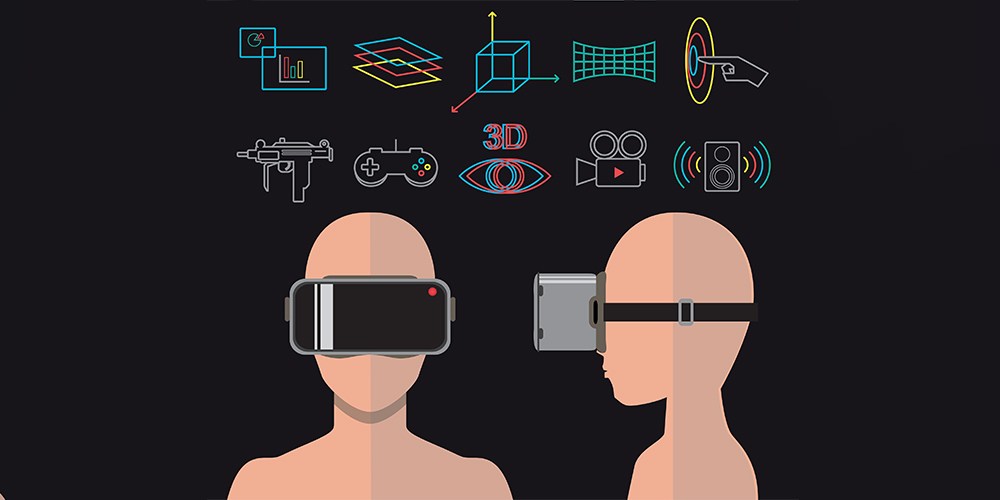 Yes, virtual reality is a hot topic on nearly everyone's lips, and it's no wonder why.

Humans are obsessed with how far they can push the envelope of their creativity, ingenuity, and the integration of technology and everyday life continues to increase with internet connectivity at a near constant.

You have to consider that many people associate technological advancements with an easier life and sophistication. And as the accessibility and distribution of virtual reality gear, applications, and technology continue to be utilized for occupational training, medicine, military, and educational institutions, it slowly becomes the new normal.

Not all applications of virtual reality are a detriment. The application of VR to allow users to explore far away geographical locations, learn how to carry out surgical procedures successfully, or train for a military operation using specific equipment is a more cost-effective method than real-world, hands-on application.

The ability to train staff in case of an emergency can help better mentally and emotionally stabilize future workers in healthcare and medicine. The role of VR in military applications has aided troops in preparing for various warfare scenarios and familiarize them with specialized equipment that would be costly to replace or fix if damaged in the real world.

Institutions such as museums and libraries, which vie for consumers attention in the presence of attention-grabbing entertainment venues have also found benefits to the use and integration of VR. Students and interested persons can find greater satisfaction with self-guided historical tours, explore distant locations, and interact with virtual objects to learn new skills and information.

Of course, when it comes to entertainment, VR has cemented itself over and over as an interactive platform with no equal. Yes, even though some of the graphics and sound quality still need to be worked out, and the constant use of VR gear can throw off balance, strain eyes, and lead to headaches, there is nothing quite like it.

With all good things, disruptive in nature or not, the key is to practice moderation.

As more people sign up to have their own personal VR gear, connect to VR applications with the help of their smartphone and change how they shop, travel, learn, and play because of VR, society undergoes a radical shift.

There is no stopping VR anytime soon because, despite the steep costs for some platforms, too many companies and individuals have their heart set upon unleashing VR technology as an everyday normalized functional good and service.

Just as the creation of social media, GPS, the smartphone, and Internet-connected technologies has continued to intertwine itself in our lives, direct our choices, inform us, and entertain us, the potential and proven capabilities of VR tech maintain a similar hold.

With the touch of a few buttons on a motion sensor device, while wearing a semi-complex headset, one can transform their worldview and understanding about information, process ideas, and fully immerse and interact within a virtual environment of their choosing. The prospects to further how people work are educated, shop, and play are in a state of flux as VR seeks to be an imminent player in how modern life plays out.