If you own a Samsung smartphone, there’s a good chance that you have a Gear Virtual Reality headset. For a long while, Samsung was offering a rebate for a free Gear VR with the purchase of a Galaxy smartphone. Even if you weren’t able to take advantage of this offer, you should still consider purchasing one of the VR devices from Samsung, available online for around $100.

The Gear VR allows you to turn your smartphone into an extraordinary virtual reality device in a matter of seconds. Once you install your phone into the headset, you’ll need to visit the Oculus store to install new apps on your device. Curious about where to start? Instead of browsing through hundreds of apps in the Oculus store, consider these best Gear VR apps. 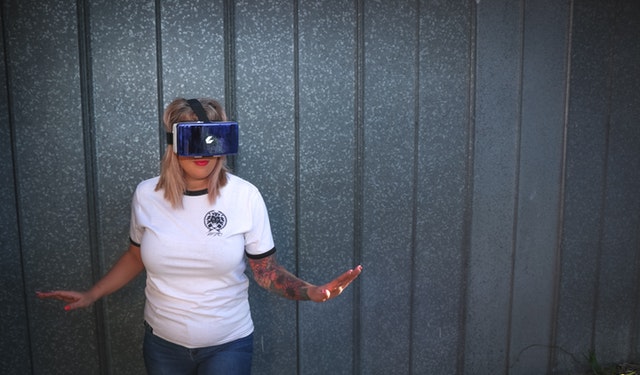 We have long maintained that we are big fans of the Gear Virtual Reality headset, so it should come as no surprise that we had a lot of fun compiling the list of the best Gear VR apps. We began by allowing our team members to test hundreds of apps from the Oculus store. Although some were better than others, it’s safe to say we thoroughly enjoyed using our device for hours on end.

By doing so, we wanted to see how the games stacked up against the opinions of other Gear VR users. We also took into consideration things such as who developed the app. By the time we finished, we felt as though we had a substantial list of the eight best apps for the Gear VR device. We are genuinely confident that you’ll have a fantastic time using any of the apps on the list.

But, we also value our community and encourage you to provide feedback. If there’s an app on the list that you’ve used, please share your thoughts in the comment section below. Additionally, if you have a favorite app from the Oculus store that did not make its way onto our list, please let us know what you like about it! Together, our community can come up with a list of the eight best apps for Gear VR devices. 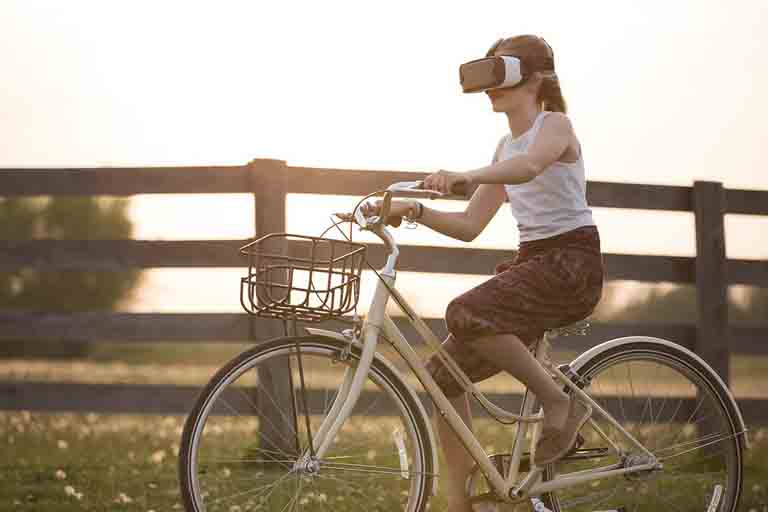 Below, you’ll find our recommendations for the eight best Gear VR apps. No matter if you’re looking to download your first apps on the device or are merely looking for something new and exciting, we genuinely believe that you can’t go wrong with any of the options listed below. Once you use some of these virtual reality apps, be sure to let us know what you think in the comment section below!

Disco​​very VR is an app that allows users to explore the world. The app features a collection of documentaries, but from the first-person perspective. This is what gives users a unique VR experience. Some of the experiences also come with narration to help you on your journey. From swimming with sharks to climbing mountains in Nepal, this app is sure to satisfy any documentary buff.

We found ​​​Sky Fighter: Tra​​ining Day​ to be one of the best games that we’ve ever played on a virtual reality device. The app is a futuristic flight simulator. When playing, you dart around a massive spaceship by using your jetpack. Users can move around by using nothing more than head movements. By doing so, the game makes it feel as though you are flying.

This is an excellent choice for those who are interested in bringing their VR experience to the next level. You can download a free version of the game, which features the training session portion of the game. When doing so, you will shoot various targets while dodging poles on the ship. If you are satisfied with the free version, you can download the entire game for $4.

Those in search of a unique puzzle game on their Gear device should look no further than ​Rangi. Rangi allows users to complete dozens of intricate puzzles. While doing so, they must navigate their way through booby-traps. If they do so successfully, users will find their way into hidden temples to unlock more puzzles and rewards.

The game has an “Indiana Jones” feel, as it features tribal architecture, art, and music. We found that this game was quite challenging and that it kept us on the edge of our seat for hours. Although challenging, it’s not impossible. With persistence, anyone should eventually beat the game. You’ll need to pay $5 to purchase this game.

For those who loved stand-up arcade games, such as Sonic, Spy Hunter, or Altered Beast, you’ll find that ​Oculus Arcade​ is the perfect app for you. Oculus Arcade drops you in the middle of an arcade game room, complete with a joystick and movement buttons. This game works best when using a Bluetooth controller.

The Oculus Arcade app is free to download. Upon downloading, you’ll gain access to 20 minutes of free gameplay for every arcade game in the app. After the 20 minutes has expired, you’ll need to pay an additional fee for unlimited gameplay. The costs can vary by game. But, we liked this option because it allowed us only to purchase the games that we knew we’d genuinely enjoy.

​​Sketc​h​fab is a unique app because it does not have much of a gameplay component. Instead, it features a built-in three-dimensional, virtual reality component. Additionally, it is a collaborative app. The app acts as a forum that allows users to upload their VR and 3D content. This means that a user created everything you encounter on the app just like yourself.

Upon logging into the app, users can choose from numerous virtual reality experiences and categories, including Animals, Cultural Heritage, Places, Science and Education, Game Worlds, and Awesome Vehicles. Additionally, users can move through 3D drawings just as you would when using Google Street view. An example? Imagine navigating through the ventricles of a heart while it pulsates.

Most virtual reality users don’t think about watching live shows on their Gear VR device, but the

​NextVR app​ makes that possible. The NextVR app grants you access to hundreds of live and on-demand sporting events. From NFL games to monster truck rallies, there’s a good chance that you’ll be able to see your favorite sporting event in a way you’ve never seen before.

Many have predicted that virtual reality is the way in which we’ll watch sporting events in the future. NextVR allows you to get a head start on doing so. For example, the app streams NBA games at least once a week. The NBA has installed virtual reality cameras underneath their hoops. So, when your favorite player slams home a dunk, your screen will rattle.

For those interested in music, this may be the Gear VR app for you. Soundscape is a visualizer that allows users to produce music in a futuristic studio. The app is a music editor that allows users to add numerous effects, filters, notes, and instruments to a single-song track. Users can also connect with their friends to jam out and collaborate in multiplayer mode.

The only downside to this app is that users only have access to the single-song track. It would have been nice if users could upload their soundtracks, or have multiple options from which to choose. Regardless, the game should still allow for hours of gameplay and family fun. Plus, the developer has committed to adding more features in the future. For $3, it’s an app that’s well worth the price.

This gaming franchise, made famous by Microsoft, is now available in virtual reality thanks to the Oculus store. You’ll still have access to numerous modes with which you’re familiar, including survival mode, creative mode, and competitive multiplayer mode. Additionally, users have the option to choose the way in which they play the game.

Users can choose between standard theater mode, which places the game on a two-dimensional screen in an auditorium-like setting. Those looking for an actual virtual reality experience may prefer to pay in immersive mode, which gives users a stereoscopic viewpoint. To play the game in immersive mode, you’ll need to sync a Bluetooth gamepad to your device. The game costs $7. 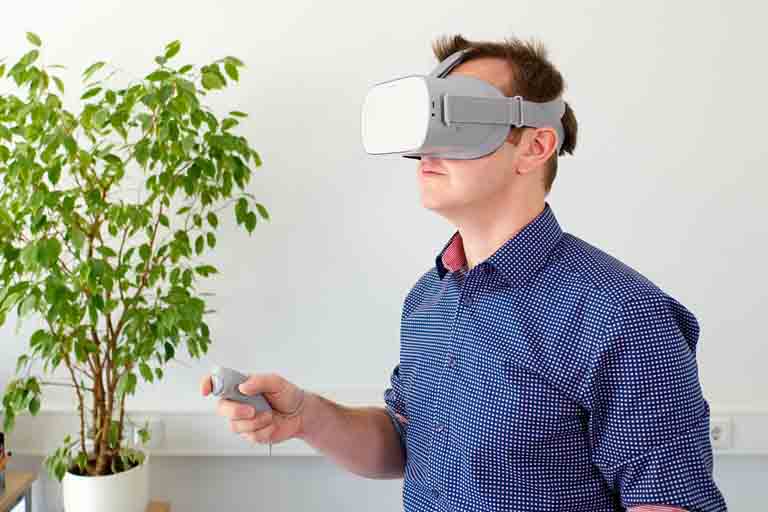 When it comes to purchasing apps for your Gear VR headset, there are a few factors you’ll want to consider. Fortunately, most of the hard work is already out of the way. You’ve already decided that the Gear headset was the best option for your virtual reality needs. Additionally, Samsung limits Gear purchases to the Oculus store, so you won’t need to choose between app stores. 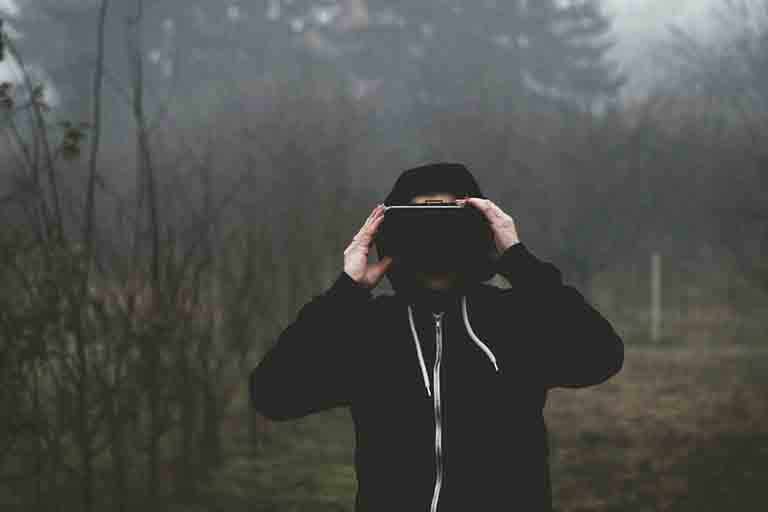 One of the most critical things to consider when downloading apps from the Oculus store is what type of app you’re going to be using. For example, apps on the Oculus store can range from intense gameplay to educational experiences. Before browsing through the apps, you should have an idea of what type you’d like to play.

Some apps may not be suited for everyone. For instance, some of the gameplay apps, such as intense first-person shooters, may be too much for the average user to handle. You should have a sound understanding of who will use the device and whether the game is suited for their age level. Doing so can help narrow down your choices significantly, allowing you to choose the right app for you.

Additionally, you’ll also want to factor the type of equipment you’re using. For example, some Gear devices come with remote controls, while others rely on touch controls located on the headset itself. When browsing through apps, you may find a detailed description of the recommended equipment for the ideal use of the app.

While you still may be able to use an app without the recommended equipment, your experience may suffer significantly. Before purchasing a new app, consider whether you have the appropriate equipment. If you do not, you must decide whether you are willing to sacrifice your experience or if you are going to invest in upgrading your equipment.

In addition to experience levels, you should also consider the age restrictions for specific applications. This is especially critical for parents who are purchasing applications on behalf of their children. Parents should ensure that they are ok buying an app that may have violence, especially if the game’s ratings are for older audiences. 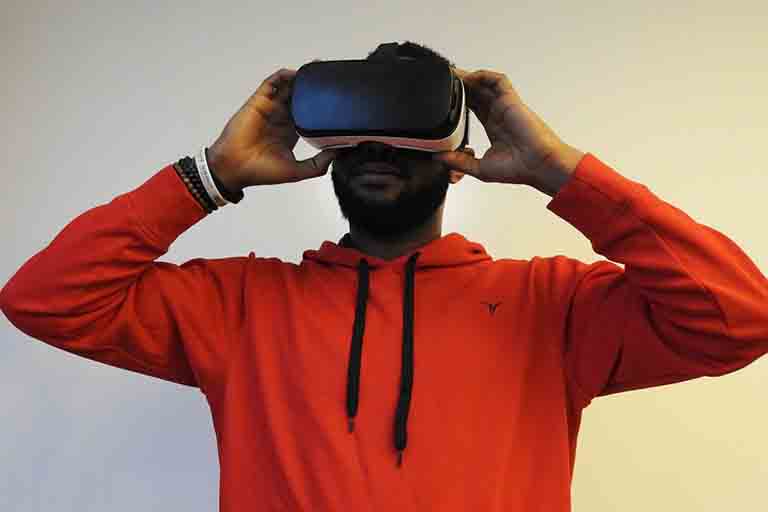 Lastly, you may want to consider the price of your app. Oculus apps can range in price. The store offers terrific free apps, but some of their better apps also cost money. You can also consider purchasing a bundle from the company as well. For example, right now, the company is offering a special edition of their Rift Bundle, allowing multiplayer use of Marvel Super Heroes, including:

The company is offering this bundle for $399, although this also includes the headset as well. The point is, you may find a package of games for a reasonable price. Consider the cost of the game before making your final purchase. Otherwise, you’ll end up racking up credit card charges on games without knowing if you’ll like them or not.

For new users, we recommend starting with free apps from the Oculus store. Additionally, your Gear VR headset may have come with a code for a few free downloads. You could also consider purchasing one or two apps to get you started. Once you are familiar with your device and know you like it, you can expand the range of apps that you use.