Lucasfilm announced that they are working with VR technology and that they are more than keen to bring Star Wars to the VR medium. However, they see too many limitations. VR tech isn’t that advanced to please the Disney division that’s behind the Star Wars franchise.

A Star Wars virtual reality movie isn’t going to happen anytime soon, but this doesn’t mean that it won’t be possible sometime in the future. Fans that were hoping to experience on their own skin the iconic scene where Darth Vader told Luke Skywalker – ” I am your father!” will have to wait much longer that initially expected.

Lucasfilm has noted that they have been working with virtual reality tech for some years now and they realize its immense potential. Moreover, they are in the love with the endless possibilities that VR has to offer. Executives not only see a cash cow that they can milk dry, but a chance to set an industry standard. Considering this comes from a Walk Disney Division, you should take it with a grain of salt.

The big issue with virtual reality right now is motion sickness. The majority of headsets are designed to offer a stationary experience – more or less; as to protect users from getting sick due to the unnatural feeling of movement. Yet, movie Directors always change camera positions to better capture the intensity and struggle of an action scene. Whether it is out of the blue, or slowly but provocative. A fight between a Sith Lord and a Jedi Knight can’t be stationary. Nobody would watch two guys staring menacingly at one another.

Unless the VR industry finds a way to avoid motion sickness, filmmakers won’t be able to tackle this new way of bringing moving pictures straight into the watcher’s head.

During the Oculus Connect dev conference that took place this Wednesday, one of Lucasfilm’s VPs, Rob Bredow, said that the company will instead focus on building short but sweet virtual reality experiences. A movie comprised of only five minutes that can immerse the watcher into the VR medium without making him nauseous. Think of flying around in a space ship, exploring a forgotten alien plateau, or witnessing intergalactic soldiers hunting a robot carrying crucial information in an immense alien city. 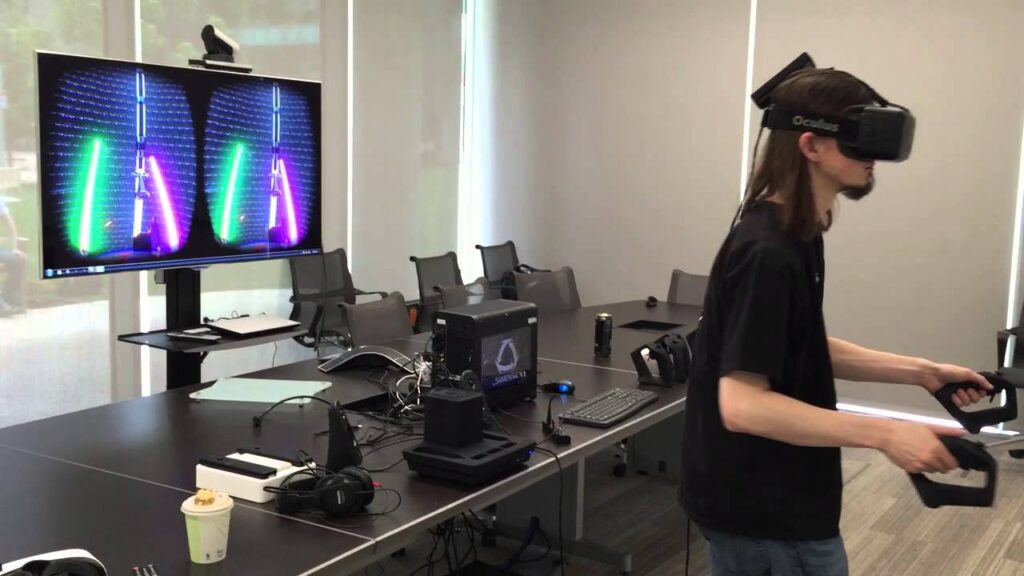 Rob said that they are experimenting with the perfect amount of movie length at the moment. When they find it, they will be able to test how much they can push the VR tech’s limits.

While we are whining over here that we won’t be getting a Star Wars virtual reality movie, Lucasfilm announced that they won’t stick with just one VR tech. As we speak, a team from ILMxLAB is currently working with the Disney division to enhance their movie-making capabilities. ILMxLAB has developed a tool which filmmakers can use to scout future movie sets. Another tool lets Directors see how an actor on a green stage looks like when he is transported into the virtual world.

Besides offering something crucial to VR filmmaking, Bredow says that these tools are incredibly simple to use. More so, you don’t need to teach anyone how to use them – you just explore their capabilities one step at a time.

Considering that it’s been almost three years since Oculus Rift wooed  us off our feet, this is a big step forward for VR. Yet, it’s still not what we’re exactly looking for. Maybe we want too much from an emerging tech. 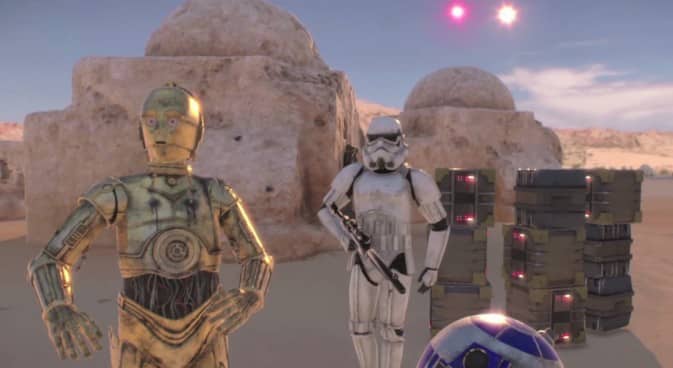 The VR industry has grown substantially over the past three years, and in this time, behemoth tech companies have taken a liking towards the trend. HTC, Samsung, Google and Facebook have announced their in-house-built VR devices. We expect some of them to be released later this year, while others will most likely suffer from delays.

Film companies that tackle the VR medium aren’t that many. Warner Bros., Lucasfilm and Lionsgate are amongst the few to delve into VR filmmaking. The Walt Disney child announced earlier this week that they are planning on developing immersive experiences with their newly-bought 360-degree camera.

If you take to the Star Wars Official FB Page you can experience a 360-video created exclusively for Facebook. It’s set in the Jakku desert from Star Wars, and you’ll be able to speed across the wreckage-filled plateau. A friendly tip, wait for it to fully load, then push the play button – it moves super sluggish if you don’t and it will ruin the experience.

Nearing the end of the Wednesday Oculus confernece, Bredow said that Lucasfilm has been working on VR for over a decade and that they intially used the computer-generated world so they can better see how the end-product will look like. Instead of just having to imagine everything.

Bredow, besides ruining our dream of watching the new Star Wars movie in virtual reality, has also said that the company uses a tool called V-Scout. This  lets Directors float above the movie set using VR goggles or tablet computers. With the help of a virtual camera lens, filmmakers can set up shots before the actual filming beings. This means that Directors save a ton of time before going out to the location themselves.

To sum it all up, no, we won’t see a Star Wars virtual reality movie anytime soon. But what we will witness is going to be the beginnings of a new filmmaking method and short and sweet immersive VR experiences.

With GoPro sinking their teeth into VR capable cameras and with big daddy Facebook opening its pockets to Oculus Rift, we might just see full VR movies in five to ten years. If everything goes according to plan.

But who knows what the next obstacle might be. If we ever get passed motion sickness, maybe another issue will arise. Maybe we will get so addicted to the computer-generated world that we will stop socializing in the real world.

Yet, this almost-apocalyptic event may be just the wild ramblings of an William Gibson enthusiast that has read Neuromancer too many times.