VR is slowly becoming much more than a fad. There are enough headsets out there to not only make it obvious that the phenomenon is here to stay, but also enough to confuse most consumers. If you’re looking for a good cell-phone based VR set, you’ve got your work cut out for you – after all, it seems like everyone is making them these days. Fortunately, our Merge VR goggles review might make your search a little bit easier.

About the Merge VR Goggles 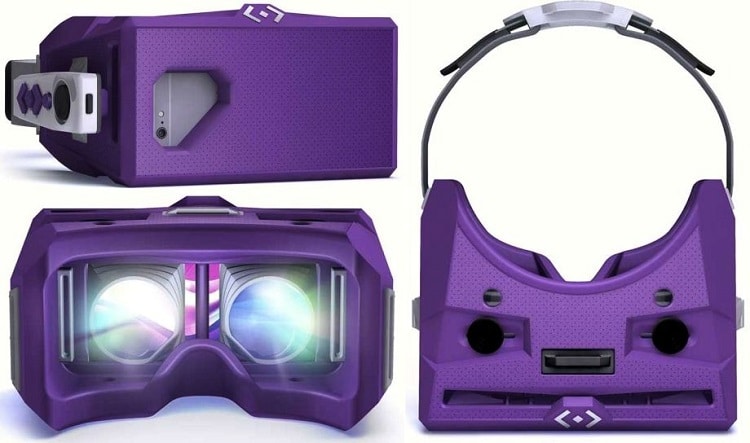 We should start with the obvious in this Merge VR goggles review – there’s not a lot special about the goggles on the outside at first glance. If you’ve seen one of the many Cardboard-esque headsets out there, you’re already familiar with how this one is set up. There’s one fairly major exception to that statement, though – this one’s a little more colorful than usual. While that might seem minor at first glance, it’s actually a bit of design philosophy that matters. This is very clearly a machine that’s meant for fun.

The good news is that some of that philosophy translates to how the rest of the machine is constructed. It’s a little bit bigger than Samsung’s Gear VR, which means that it works with slightly larger phones and that it provides a slightly bigger FOV. This makes it a great choice for gaming, for example, as it helps the images feel a little more immersive. Unfortunately, that added size also makes it heavier, which means that it is more difficult to keep wearing the headset during prolonged sessions.

At the very least, the construction of the headset is solid. While the device is made out of a foam, it’s a surprisingly dense and a rugged foam. It’s not going to fall apart soon after purchase, nor is it necessarily going to damage the phone inside after a single fall. While it’s not necessarily a terribly friendly design – the controls are, maddeningly, on top – it is definitely a design that will stand up to wear and tear.

While we can discuss visual performance to some degree, it’s important to note that visual performance isn’t something that’s going to be the same for every user. The smartphone used to power these goggles will largely determine the play experience. Fortunately, the wide range of available goggles does mean that you can get an incredible level of performance here. Is it as good as what you’d get with a proper PC VR set up? Of course not, but it’s incredible for what it can do.

Visually, the most striking thing found in this Merge VR goggles review was how smooth everything was when the device was working correctly. Yes, it’s a mobile VR device but it’s still pulling its weight in terms of screen quality. Everything looks good when playing on a suitable high-end phone, good enough that you might be forgiven for getting a little too into your favorite games. The individual apps have a little range in terms of how good they look, but you’re generally not going to walk away mad at the device.

On the other hand, you are going to eventually deal with some motion blur. This is actually a hardware fault, as the lenses have a tendency to get pushed out of position during longer play sessions. It’s not the end of the world, but it is something that needs to be noted. Nothing’s worse than stopping an immersive VR experience to deal with hardware problems – something that happened more than once during this Merge VR goggles review.

This Merge VR goggles review was undertaken with an iPhone at typical volume settings. It wasn’t fancy, but it worked. That’s actually a fair phrase to sum up the entire audio experience for the Merge, actually, as you’re not going to find anything particularly fancy here. This is a phone-based VR ecosystem, so all of your sound issues and bonuses are going to stem from the phone you use with the device.

The sound on the Merge is amazingly acceptable, considering that it doesn’t come with earphones. It’s tinny and imperfect, but it’s fine for the apps with which the device currently works. If you don’t go into the purchase expecting surround-sound quality from the device, you probably won’t notice the fact that the sound quality isn’t perfect. It’s a typical solution for this price point, so you’re really getting what you pay for.

The biggest sound flaw is that you really can’t use wired headphones with the Merge. With a little work, you can use wireless blue-tooth headphones as long as they are in-ear – over-the-ear headphones just don’t work with the already-bulky device on your face. It’d be nice to play around with this headset in a 2.0 version that was a little more sound-friendly, but the current version is at least acceptable.

As our Merge VR goggles review has showed, this device is an interesting stop-gap VR measure. It’s certainly a cool toy and a great way to experience mobile VR, but it’s not the end-all, be-all solution for which some are looking. It does what it does very well, but it’s hard not to want it to do more. If you’re looking for a non-Gear mobile solution, this one is fine. If you’re looking for something truly amazing, though, you still need to look at computer-based VR.