Taking a Magic Leap into the Future 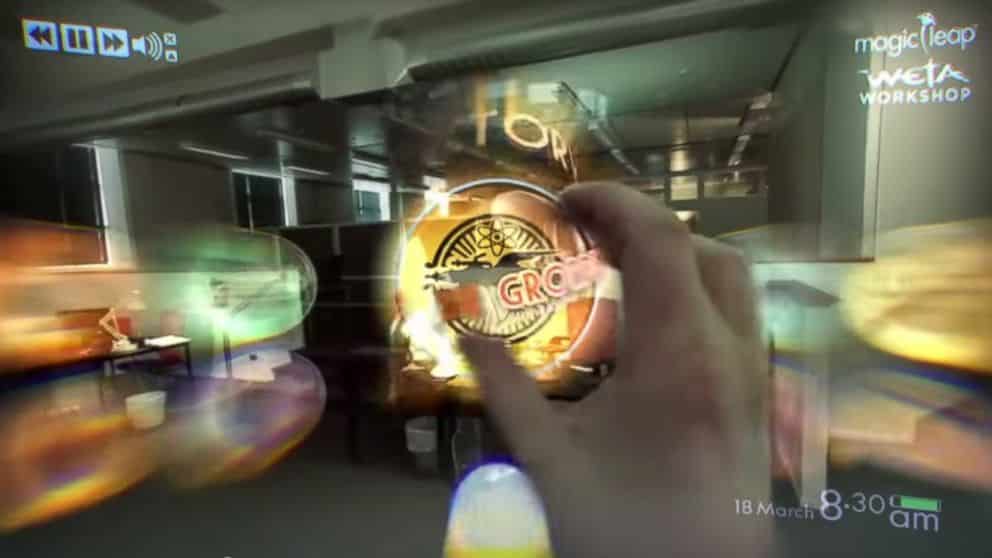 Just when everybody thought that the recent Google-purchased startup, Magic Leap had been too quiet for too long, the company comes in and gives us something like this: a new demo of their technology. And what a demo it is.

When you click play on the video, the first thing you’ll see is very small message at the bottom of your screen. This message says that the video was shot completely via the Magic Leap augmented reality tech on the 14th of October, 2015. Before being posted online, the video was presented at the WSJCD Conference earlier last week. Needless to say – the people in the audience were just as awestruck as we are now.

What one might believe if he saw the original video posted by Magic Leap back in March would be that it will be used for gaming. And he would be right. At least, to a certain extent. If you remember the video, you’ll also remember that right at the start, the apparent user opens up a menu of options available for the augmented reality device.

Before opening the menu, however, he minimizes a YouTube window. And he checks his email. Then, in the menu, he has the following options: pictures, settings, tools, music, games, and friends. It does remind one of the menus we used to have on our old mobile phones. Ultimately, the man chooses games (the obvious choice, really). And then he picks a game called Dr. Grordbort Presents Victory. In that game, he chooses weapons, he fights of robots, and he eventually dies (we’re led to believe that he eventually loses the game).

Suffice it to say that after that video was released, people were left with more questions rather than answers. Questions like: will this technology be more suited for gaming? When will it be released? How affordable will this eyepiece be? Also: are those guns real? Because in the video, the guns do seem to have a far greater resolution than all the other things on the head-up display.

It only took the people from Magic Leap about eight months to come up with answers to some of these questions. And again: this video isn’t much of an answer as it is, again, a teaser. The company has probably heard the critics who said that it will be, once again, a gamer dominated market. So this video comes with two things that have another aim. While keeping the gamers in check, the robot and the solar system in this video make appeal to another audience: the supreme nerds – the scientists.

Fans of the sci-fi genre have probably been left jumping up and down in excitement after viewing this newest release by Magic Leap. Let’s see exactly what happens: you click play, the message above appears, and then the player (or experiencer) slowly raises his view. He then sees a table, and under the table there is a small little robot.

How cute! You may think. But actually, extremely complicated programming is involved. The little hovering bot starts moving. And then waves towards you – indicating that the software recognizes your position relative to your surroundings. But also the little robot’s position relative to the area in which it’s projected: we can see this because as the user moves, the robot stays in place.

After this, a new frame appears in which the user sees a moving replica of the Solar System spiraling around in the middle of the air. Although this isn’t necessarily a scientifically accurate representation of reality, it’s still pretty cool. The orbits of the planets are perfectly drawn and their accelerations around the sun are perfectly relative to one another. The main fault of the system is the fact that the planets are not relative to one another in size. Either the Earth is way too big, or the Sun, Jupiter, and the other giants are way too small.

But no worries, the fact that everything is perfectly in motion more than makes up for this. The sheer level of minute details is also astonishing. You can actually see the clouds moving on Earth. And the Moon orbiting the earth. And the asteroids in the asteroid belt moving each at different speeds in their orbits around the Sun. Oh, and speaking of the Sun – it too can be seen moving around its own orbit. And the luminosity of the star is incredible.

But what’s more: you can actually see the light of the sun bounce off of the desk that sits in front of the user. Indeed, we have nothing to criticize about this demonstration. And if what Magic Leap CEO Rony Abovitz rings true, then the actual experience of virtual reality will mean so much more than what we’ve seen here. Abovitz mentioned during the WSJCD Conference that experiencing Augmented Reality through Magic Leap will mean so much more than this little video we’ve seen here.

The hopes of the company, Abovitz says, are to build not only an augmented reality device where you can run apps, but actually create “an operating system for reality.” As we can deduct from the first video, the second video, and from the company’s statements – this OS will let you do just about anything that your smartphone lets you do – and more.

My problem with this is: I don’t want another device on which to check my email. Each time I receive a newsletter from a website I have only visited once in my lifetime, I get 4 total notifications: on my laptop, on my tablet, on my smartphone, and also in my car. Frankly, I’ve had enough of these. Not to say that email integration is a bad thing, but I don’t see the point.

Augmented reality though Magic Leap can do so many amazing things, it does seem a pity to use it for something as trivial as checking your email. This technology is capable of letting you destroy robots, or explore the solar system, or have a personal robotic companion – why do I need it to check my email?

Instead, I would argue, it would be better to have it link up with my Android tablet, and have my little assistant mute the notifications on my tablet and display them on the screen. After all, everything I’ve mentioned in this article is owned by Google. How hard could it be to integrate them with one another?

However, this is just wishful thinking. Here you can see the video that Magic Leap have posted on their YouTube channel: