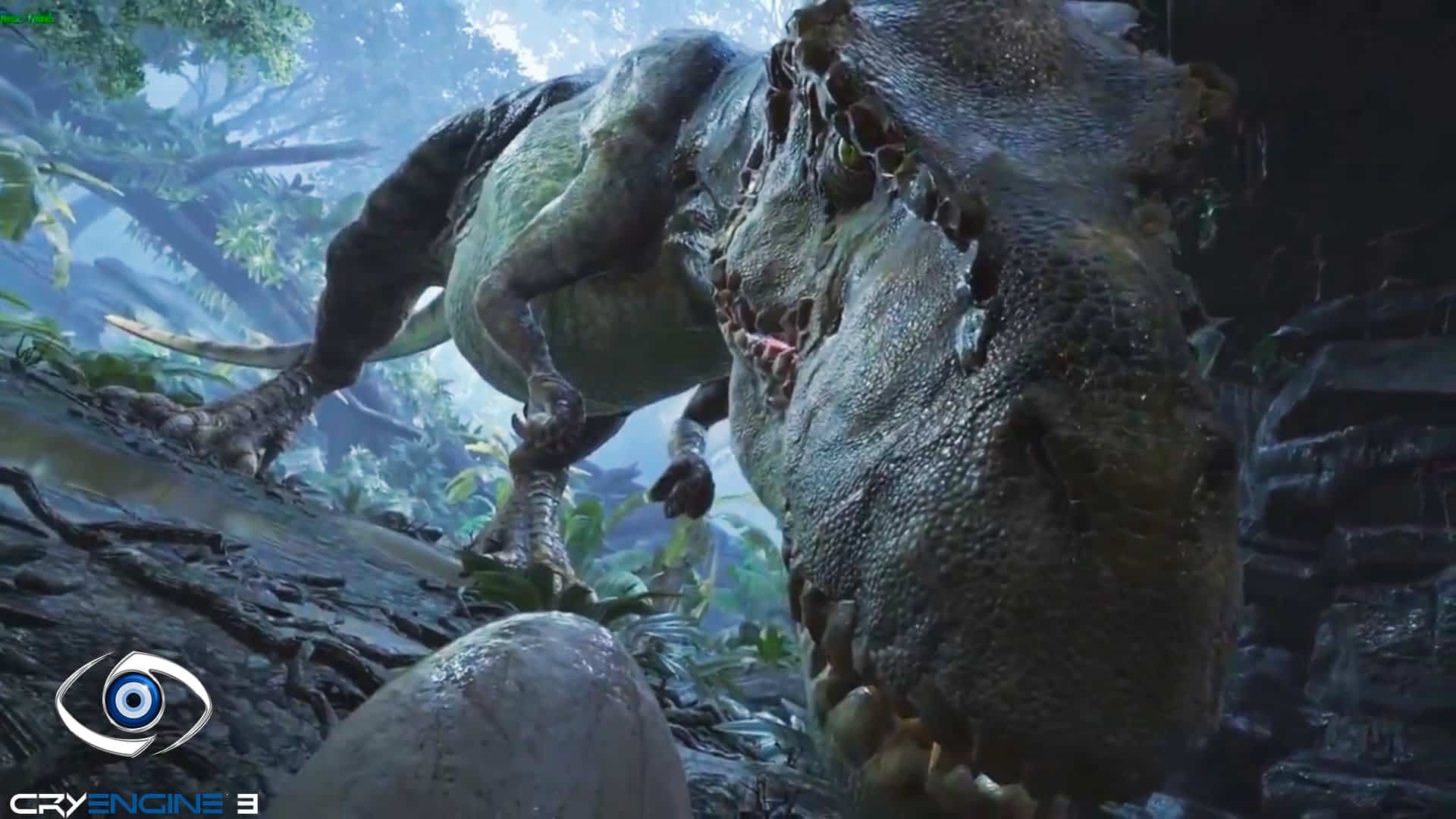 Are you hyped? No, that is a redundant question. The real question is: are you jumping up and down and screaming like a little girl? Why? Because Crytek is now showing us that even dinosaurs dream of virtual reality. Don’t believe me? Go on Steam and search for Back to Dinosaur Island. Now do you believe me? Good, then we can go on with the VR showcase of this week.

If you didn’t think virtual reality is a groundbreaking, incredibly amazing, fantastic, and let’s not forget momentous achievement, then Back to Dinosaur Island is coming to prove you wrong. And it’s literally doing so via a Tyrannosaurus Rex. Yes – of course that’s the star of the show. What else would it be? Although in the very first moments of the VR experience you are bugged by a dragonfly, that’s pretty far from what you’re actually going to be excited about when you first put on the goggles to enter prehistoric Earth.

No matter how many 3D Hollywood blockbusters choose to trample over the legacy of Jurassic Park, we still are pretty far away from an actual encounter with our dino-friends. The amazing people from Crytek are thus promising us a ‘first contact’ to remember. Of course, from the point of view of paleontology, first contact between man and dinosaur probably occurred when we dug up the first bone. However, this new virtual reality game by Crytek promises it won’t be just another encounter over the eons. Instead it will bring us up close and personal with our favorite sharp toothed beasts. So close, you can see the inside of a T-Rex’s mouth.

If that isn’t close enough for you, then I suggest you wait for the invention of the time machine – you may even get close enough to feel the inside of the T-Rex’s throat (just kidding). However – something that is no laughing matter – the game is actually available! So – that part about jumping up and down screaming – you may have to postpone that until you’ve clicked download on the Back to Dinosaur Island virtual reality game.

Still, before you do that, you may want to check out the following details:

Back to Dinosaur Island System Requirements

Virtual Reality apps are extremely needy when it comes to computing power. More and more, they seem to be pushing our computers to the limits of what the market has available. I mean, just look at the amount of memory (RAM) that is required just to load a single, small, virtual reality demo. Most games in VR need at least 8 gigabytes of RAM while it’s recommended that they have over 12.

Here are all the system requirements of Back to Dinosaur Island, the newest Crytek game:

As you can see, the requirements for this game are really, really high. And remember, these are the minimums for this game. Howwever, if you’re able to provide a computer like that one, here’s what you will be able to see:

German game developer Crytek mentions on the Back to Dinosaur Island download page that these are set so high so that people would not feel like VR is struggling to work with our outdated computers. As you may remember, back in the early 2000s, the system requirements of games began a race with tech providers: no matter what specs your PC had, it would not be long before it became obsolete.

That’s what Crytek and other VR game developers are trying to avoid. So they’re setting the bar high, and are hoping to not go over it as soon. Still, you are left wondering which monster is the most powerful: the PC in your room, or the in-game T-Rex. And that’s why they are also moving towards the direction of console video reality games.

After all, the little game that Crytek just launched on its Steam account is just a sneak-peak at the larger, far more complicated game: Robinson: The Journey.

Announced back in October, Robinson is a whole different level from Back to Dinosaur Island. The journey isn’t taking place on prehistoric Earth this time. Pretty far from it. The main character in the game is a version of Robinson Crusoe (from which the concept probably draws its name). The in-game Robinson is stranded not on an island, but on a distant planet (according to Crytek developer Elijah Freeman). On this planet, you (because it is a role-playing first person game) encounter a race of beasts that are extraordinarily similar to the Earthly dinosaurs.

In fact – the two types of beasts are so similar, that the game does have a whole lot of explaining to do as to why they’re so alike.

But what we know for certain, and can gather both from the video of Robinson, and the launch video accompanying Back to Dinosaur Island, is that the final virtual reality experience will be unfathomably cool. So cool, you will even be to avoid dragonflies with your head. Or to use your head to run into the right direction. And most importantly: you’ll be able to look around in 360 degrees – the most vivid, important, and (after all) the trademark element of virtual reality.

I don’t know about you, but I for one am incredibly excited about this new virtual reality experience. It’s a thing that will have us all on the edge of our seats: but this time, it will not be because we’ll be looking at a big flat screen, but because we’ll be right in there. With the game. In the game. Running away from a pack of angry dinosaurs.

And you know what? It will be spectacular.