Virtual Reality Glasses: What Are They And How Do They Work? 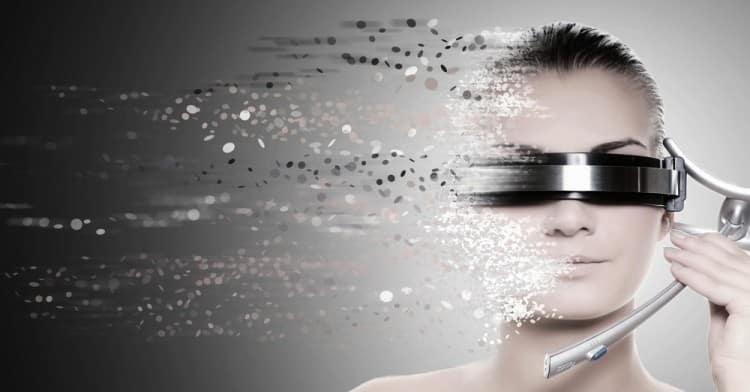 While virtual reality has been around for quite some time, this unique technology is currently enjoying a moment in the spotlight. As “VR” becomes an increasingly household phrase, more and more people gain interest in the products available on the market today. More specifically, people want to know what these products do and how they work.

What are Virtual Reality Glasses and How Do They Work?

The dream of virtual reality has entertained scientists and inventors since the early 1800s. The notion of a virtual world was initially much more simplistic than it is today, but the foundations for what we now call VR were set long ago.

As technology has progressed and become increasingly smaller, virtual reality has transformed. Evolving through several distinct phases, VR has gone from a specialty product used by the military to something much more mainstream. Today, for a relatively low price you can enjoy a simulated reality from the comfort of your own home.

For those who are confused about the different terminology floating around today, don’t worry, a lot of people are. But, rest assured, it’s not nearly as confusing as it seems. By now it’s likely you know that the phrase “Virtual Reality” is often followed by one of three words: headset, goggles, or glasses. But what exactly do those terms mean?

Simply put, there is no difference between virtual reality headsets, goggles, or glasses. All three terms are used interchangeably to describe the same type of eye covering device that gives the user instant access to a virtual world in front of them.

How These “Glasses” Work

How a set of virtual reality glasses works is highly dependent upon the type of device, you are using. Some of these new devices are incredibly simple in design and involve nothing more than using an app on your cell phone. Other headsets are much more complicated and require high powered gaming computers with powerful graphics cards to function correctly.

Each type of device has its pros and cons, but usually, the more expensive high-end models provide users with the best VR experience. And to be clear, by “best” we mean the most immersive experience.

Other factors that affect the way we perceive the virtual reality of today include the field of view, frame rate, and latency. Field of view (or FOV for short) refers to the viewing angle that is available to the user wearing the glasses.

Frame rate refers to how many frames per second (FPS) your GPU can display. Latency in this context is how quickly one pixel becomes a different pixel.

By balancing the different aspects that affect the way our brains perceive the virtual environment in front of us, VR developers can create a surprisingly convincing “reality.” However, if any of these factors is not quite right, VR glasses can cause nausea that is similar to motion sickness.

Compared to the implementation of virtual reality in the past, virtual reality glasses today are much more “in-home” oriented. Additionally, VR glasses are incredibly sleek compared to VR applications of history. Also, thanks to the advent of smaller and increasingly powerful technology, these relatively small devices can produce an incredibly impressive experience. 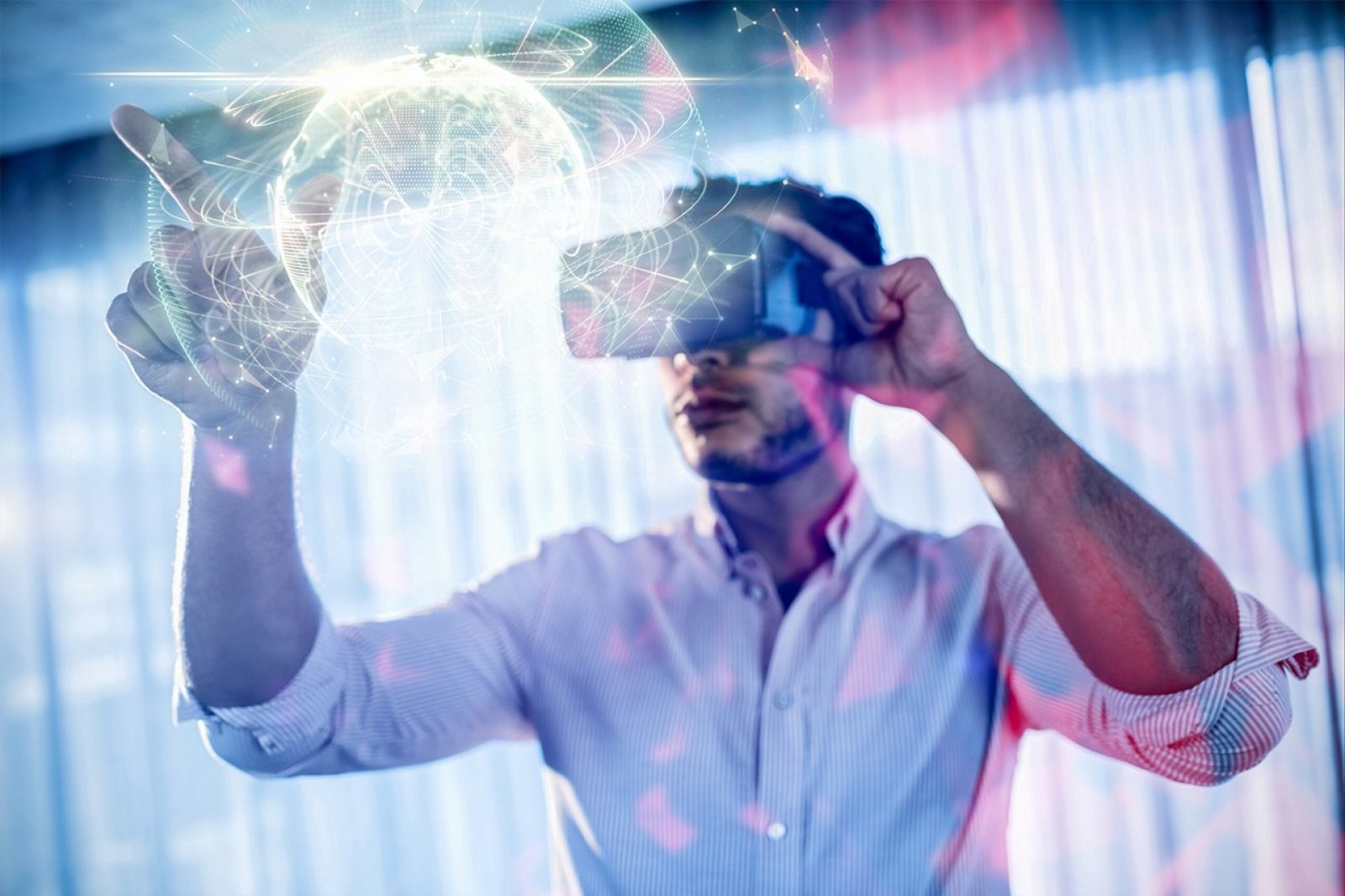 While the newest VR glasses on the market today may still seem bulky, they are in fact quite small when compared to virtual reality stations of the past. In the 1990s virtual reality games were a favorite in arcades, but these machines were bulky and quite restrictive in the user’s ability to move around.

Today, even tethered VR headsets give you a sense of freedom that was once only a dream.  And, as technology continues to develop, we see further decreases in size and increasing freedom of movement.

As we mentioned briefly above, the original precursors to VR glasses were not intended for in-home use. Today, virtual reality glasses are making it possible to travel the world without leaving your home.

Today’s models are designed with the at home gamer and viewer in mind. And while they may seem expensive, their real cost is much lower than virtual reality simulators of the past. Plus, as these devices become more mainstream, they are being sold in supermarkets and stores alongside other home goods. 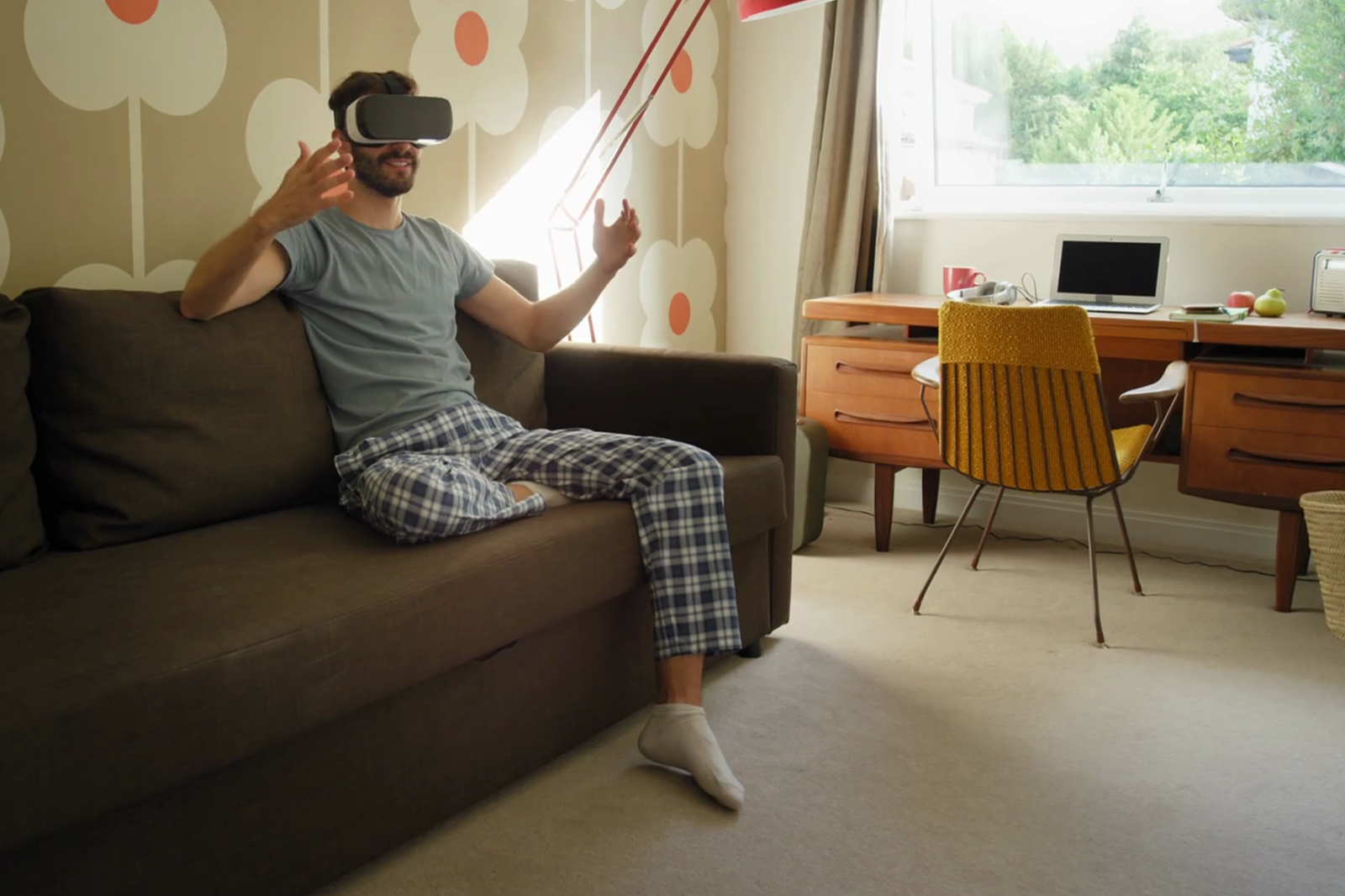 Unlike precursors to today’s virtual reality products, VR glasses are increasingly game and gamer oriented. These devices are viewed as a means to improve gameplay and immerse the user in their fictional world.

While games for virtual reality devices are still quite limited, there’s no denying that companies are pushing to make more titles and effects available. In fact, most high-end VR glasses require what is typically referred to as a gaming computer to function correctly.

As virtual reality developed from the concept of stereoscopic imagery to the blossoming world of VR glasses that we know today, availability has become increasingly prevalent. While high-end devices are still relatively exclusive due to their high-cost barrier to entry, many mid-low range models are available in the electronics section of your local supermarket.

Because internet access and computer availability have become so ubiquitous to life in the U.S., these devices are fitting in everywhere. Now, these devices are in homes, in schools, and even in businesses. As technology continues to develop, future uses are nearly limitless. 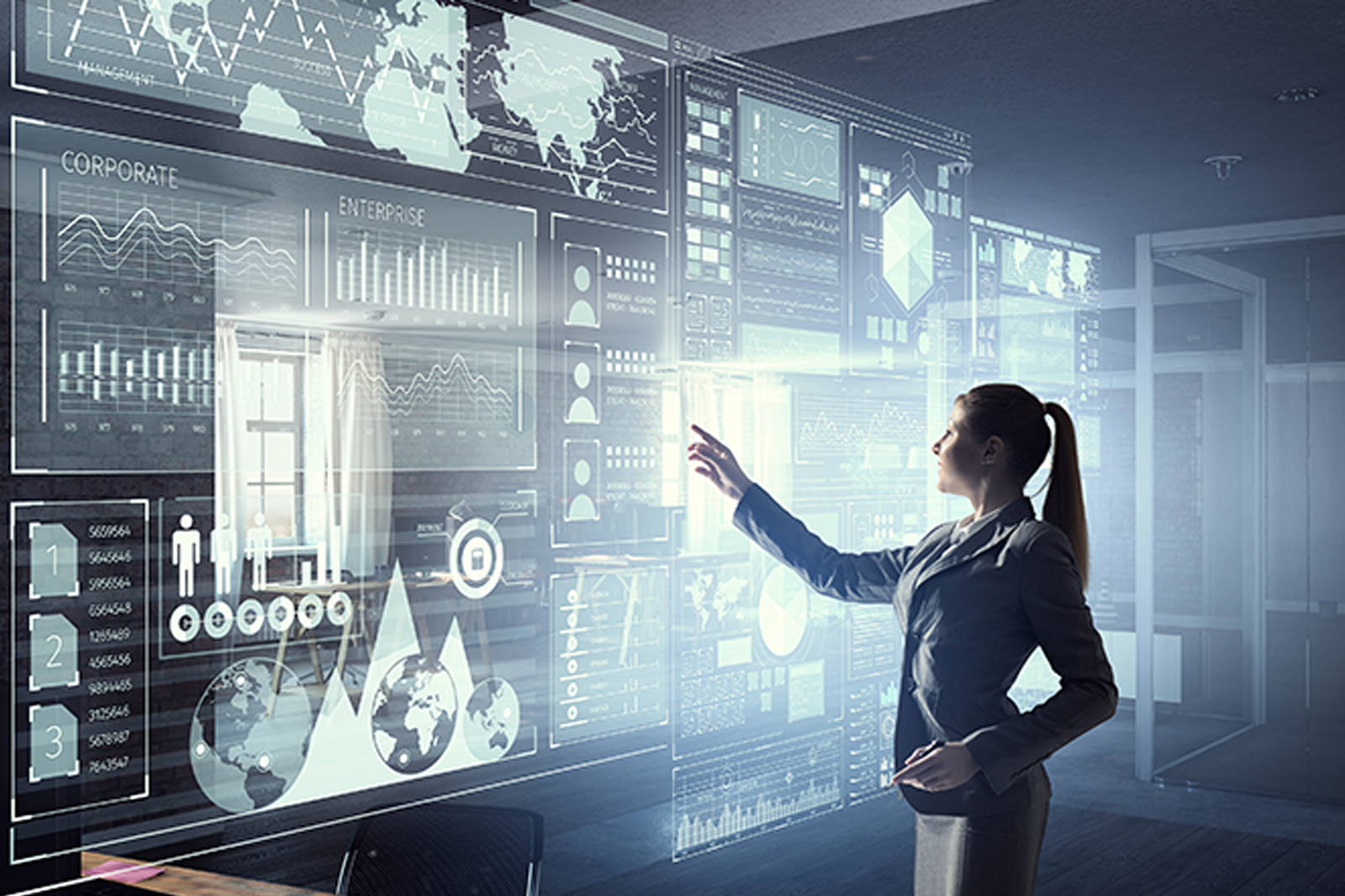 As we briefly mentioned above, there is a broad range of VR glasses available for purchase today. Some of these models are incredibly sophisticated while others are relatively simple. With this large variance in design comes an incredibly broad spectrum of price points. In general, models that are more expensive cultivate the best experience.

In this category, there are only a few designs available on the market. A few brands include the Oculus Rift, the HTC Vive, and the Sony PlayStation VR. Each of these models will cost the consumer several hundred dollars. And that number does not include the necessary computer or game console to run the unit.

Because these glasses demand powerful GPU and CPU, it takes a powerful machine to get these devices off the ground. If you are already a serious PC gamer or have a PlayStation 4, then this may not be cost barrier for you. But, most people do not have the equipment necessary to run these top-tier VR glasses just sitting around their homes.

Products in this category tend to be much less expensive than high-end glasses, but still a good deal more costly than other budget-friendly options. Most mid-range VR glasses are mobile in design and depend upon specific types of phones to use. The most prominent brand leading this category is the Samsung Gear VR.

More recently a few new options have entered into the mid-range category of VR goggles. These standalone headsets are a true hybrid between smartphone powered devices and high-end tethered models. While these glasses typically cost more than other mid-range models, they are still much less expensive than their high-end counterparts.

For budget-conscious consumers, there are VR devices available at nearly any price point. Unfortunately, cheap headsets like these will not provide a high-quality experience for consumers. But, if you are looking to dip your toes into the water of virtual reality, these headsets can be a good first step.

Smartphones power all of these devices, and they typically do not have specific brand requirements. However, it is worth noting that many of these devices do not accommodate the most significant smartphones available on the market today.

Some of these models have proprietary VR apps available, but many rely on the numerous apps that are already available through Google Play and the App Store. While budget-friendly devices are easy to come by, they are insufficient in capability.

While the general public is continually becoming more interested in the capabilities of virtual reality, it seems that some stigma remains. Many consumers are concerned that the investment cost in high-end glasses is not yet worth it. Simultaneously, people are disappointed with the lackluster features of budget-friendly devices.

However, as prices are coming down for high-end VR glasses, more people are investing. Additionally, as standalone models are reaching consumer hands, more people feel confident in using these devices. Occasionally people will even use them in public.

Unfortunately, because VR headsets obstruct the user’s field of vision entirely, many people are not happy about the use of VR in public spaces. And if we’re being honest, this practice does indeed seem a bit reckless.

In addition to concerns about the dangers of widespread VR headset use in public spaces, many people are becoming concerned about the other side effects these glasses come with. As we mentioned above, when a VR device is not functioning quite right, it can cause intense nausea that feels similar to motion sickness.

As it turns out, cybersickness is incredibly common and can happen when using nearly any electronic device. While the military and seasoned pilots are quite familiar with this phenomenon, it can be quite concerning for those who have never experienced it. What’s worse is that as 3D modeling and graphics improve this plight only worsens.

This visually induced motion sickness is off-putting to many would be users of virtual reality devices. But, as these technologies become more common, it is likely that this concern will gradually fade away.

With any new technology, consumers are eager to know how it compares to older technologies. These comparisons inform consumer decisions regarding the value of new products. When it comes to virtual reality glasses, there are three main comparisons to be made regarding gaming, video, and previous virtual experiences.

Compared to the games available on PCs and gaming consoles today, the titles available for VR devices are incredibly limited. However, new game titles come to market often, and some older titles have already made it to VR.

While most of the excitement surrounding VR has focused on gamers and gaming, many users are finding immense joy when it comes to using virtual reality goggles for watching videos. These headsets create the perfect environment for watching movies and shows no matter where you are.

Today’s virtual reality experiences are much more sophisticated than VR experiences of the past. As we mentioned above, improvements in technology and a strong focus on consumer use has taken VR to a whole new level. Unlike big systems of the past that you could only use in arcades, today’s VR glasses bring the virtual experience to you.

Without a doubt, virtual reality technology still has a lot of room for improvement. But, as consumer interest increases so will the technological advancements fueling this gaming movement. Already VR has become more mainstream than was initially anticipated, and it seems that developers are eager to fill the desires of consumers in this market.

On the other hand, while it may be tempting to go out and buy a top of the line VR system, for right now, it seems that the best value comes from mid-range models like the Samsung Gear VR and the Oculus Go. And of course, if you’re merely curious, consider trying out an inexpensive budget model.

When it comes to choosing a virtual reality experience, you really can’t go wrong by following your interest. Just know, that while these technologies are impressive, they aren’t flawless. Be patient with yourself as you get used to this new means of consuming media, and always support developers that you find inspiring.