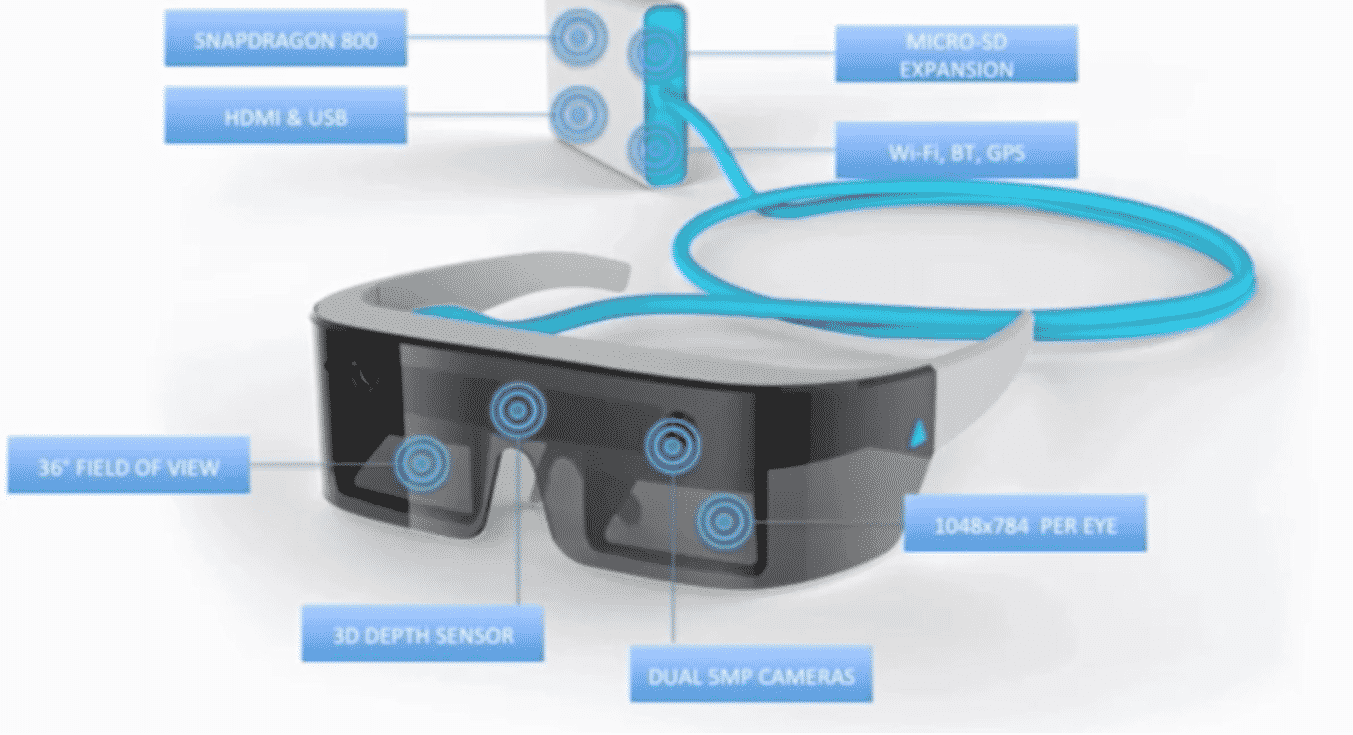 Google Glass may not have been the roaring success that everyone expected it to be, but since it release it drew a lot of attention to the world of wearable eye-wear and augmented reality. In the past three years, tech giants such as Samsung, HTC and Sony have been working on their own VR and AR devices which are meant to revolutionize, not only the gaming world, but almost every aspect of our lives.

Wearable augmented reality goggles can do so much more than simply snapping a photo or recording a video. By integrating the concepts of augmented reality we can feed information about the world in real-time, overlap an alternate universe over our own, project images in HD resolution and even manipulate surrounding objects.

With this in mind we would like to take a look at some of the most exciting forthcoming or already released augmented reality glasses. Of course, there are also devices that can create virtual realities or top-to-toe wearable gadgets for the fully immersive experience. Today we will focus only on lightweight goggles which can change the way that we interact with the world. 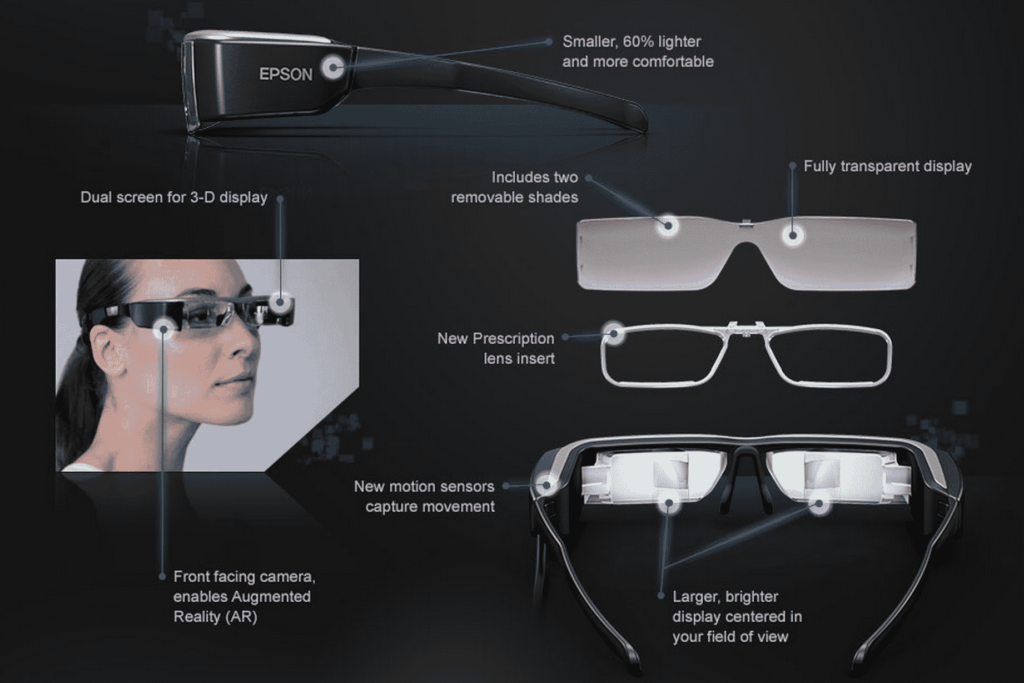 Moverio’s next generation BT-200 smart glasses were designed to enhance the way that we experience the world. They can truly be called ‘next-generation’ because they feature a light-weight design and a plethora of technological improvements as compared to the previous generation.

Users are now able to add their prescription lenses to the device, the model is 60% lighter than its predecessor, new motion sensors have been added to capture head movement and the new removable shades provide more contrast. The BT-200 Moverio augmented reality glasses also come with a new front-facing camera designed to enhance our reality.

As far as the control unit is concerned, it is also elegant and light-weight. The control, which operates on Android OS, features upgraded motion sensors, a textured touch-pad and a micro SD card slot for extra storage. It is also compatible with Bluetooth and Wi-Fi and can provide around 6 hours of battery life. 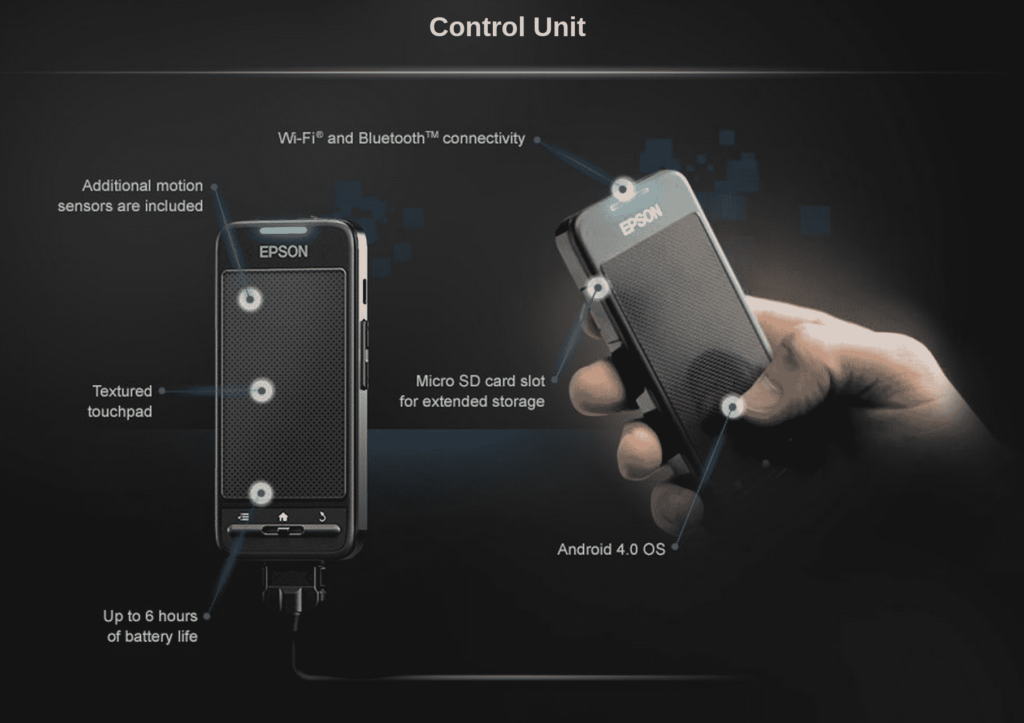 Moverio is available for roughly 700 dollars on Epson’s official website. Although the price is a bit high, the device is definitely sturdier than others we experience. In addition to this, it works superbly with Phantom Vision+ drone/UAV.

Our next device the list of promising augmented reality goggles is the Mirama prototype. Compared to Moverio, this wearable technology is far from being released. At the moment it is in the beta testing stage. This doesn’t mean that it hasn’t already shown promise. For this prototype to work, the user must have a desktop computer. It doesn’t have to be an Alienware or high-end set-up. The reason why Mirama is so interesting is because it’s one of the first devices to solve the problem of input. 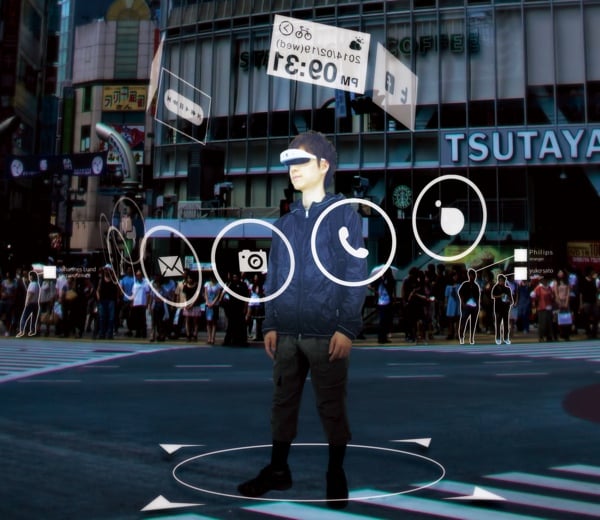 Like all augmented reality glasses, the Mirama prototype looks silly and fails to solve the problem of many users: how am I going to use this in public? In addition to this, the sensor camera must be placed in front of the users, which will result in additional self-consciousness issues. Here are the specifications of Mirama, as explained by its developing team:

Developers are silent for now, but with over a year of beta-testing for the Mirama device, we can only expect that a better version of it will be released soon. Until then, let’s take a look at an interesting video which showcases the device’s capabilities.

Laster SeeThru has a totally different take on augmented reality technology. Instead of using a webcam to feed its users information about the world, and to avoid discussions about invasion of privacy, the developing team decided to pull out data for the gadget from its GPS locations. The company claims that SeeThru devices are the first genuine wireless augmented reality goggles to operate without the help of webcams. 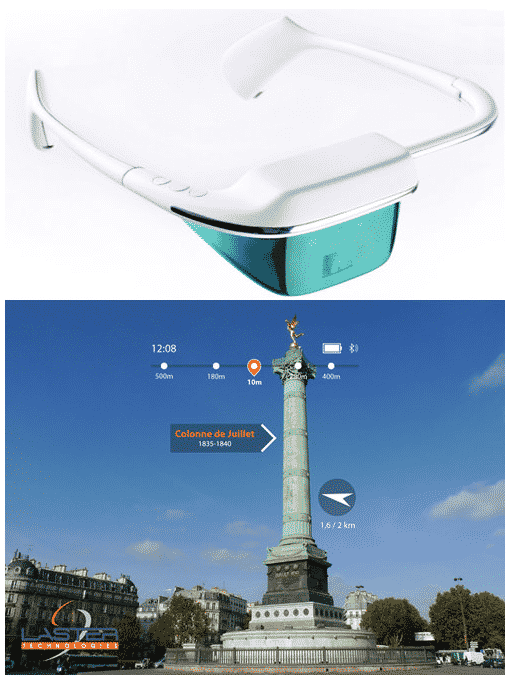 Sport enthusiasts and travelers will be happy to hear more about this device, because it was designed specifically for them. It can help users navigate by giving live information, suggest activities such as biking or parachuting and offer extra data about important buildings and location. Available for 399$ dollars, SeeThru’s augmented reality goggles feature wireless & smart-phone communication, a navigation head tracker and other interesting apps & features (inbuilt battery, DOF head tracker, contact book navigation, email, texting etc).

Some of the examples we gave regard augmented reality devices as an accessory for regular devices such as tablets and smart-phones. Atheer is another company to implement this strategy. The Atheer AiR developer kit 2 follows after the first generation device with improved features. This type of goggles promotes natural interaction with the environment through hand-gestures that can control surrounding objects. 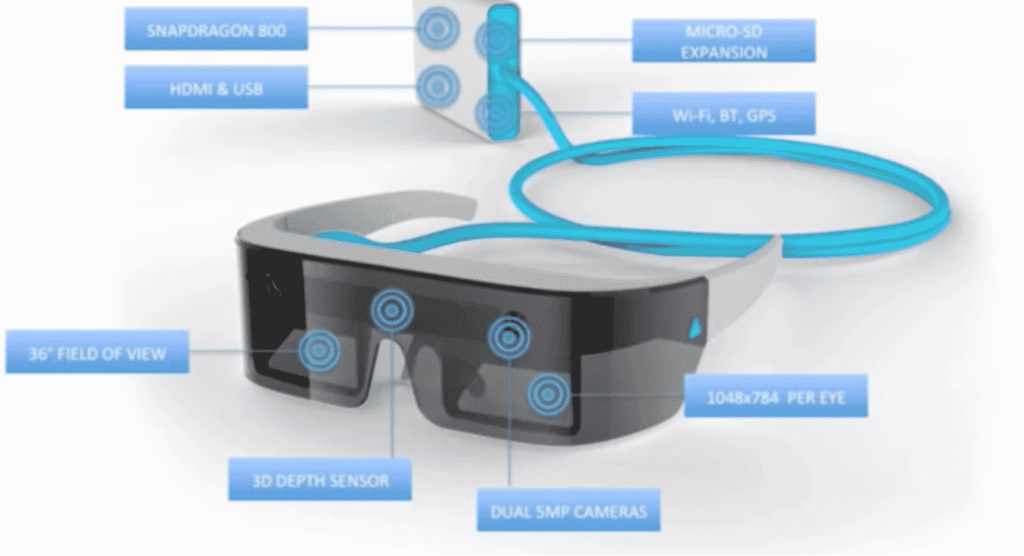 Our last suggestion for augmented reality goggles you didn’t know existed is ORA-S, developed by Optivent. These see-through glasses take a unique approach on AR environments. The latest set of goggles comes with a brighter resolution which can render crisp images. 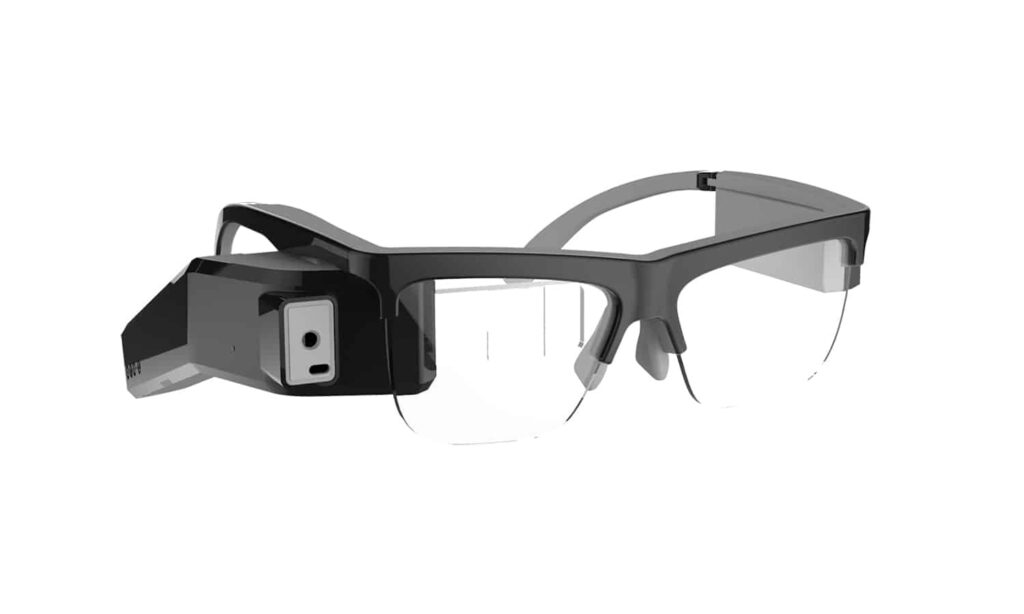 The ORA-s device has two modes when it comes to virtual imagery location: the standard mode enables the user to view images at a 0 degree angle, while the Glance Mode will feature a 20-degree angle. The modes can be activated by tilting the display upwards (for AR mode) or downwards (for Glance Mode).

Price: 949$ by purchasing the device from the official page.

This concludes our list of virtual reality goggles. Of course, there are many other devices worth mentioning, such as GlassUp, KGlass and Icis. Then there are also mainstream VR and AR headsets such as Project Morpheus, Oculus Rift or Gear VR. All in all, it seems like the world of virtual and augmented reality is slowly becoming mainstream. It is only a matter of time until more capable headsets will be released to the market.