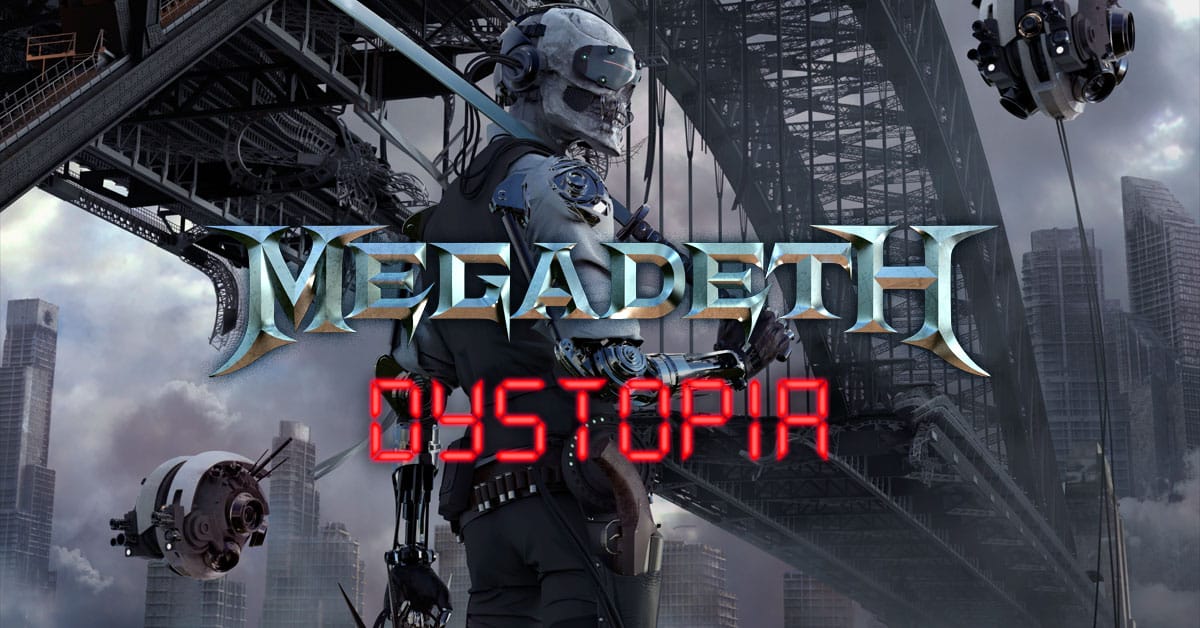 It seems that thrash metal pioneers Megadeth are about to enter the Virtual Reality Dystopia. It’s not that they will be entering virtual reality or any sort of dystopia, but they will be launching five songs from their upcoming new album entitled Dystopia in a virtual reality format. This means that you will be able to join headbangers Dave Mustaine, David Ellefson, Kiko Loureiro, and Chris Adler on a virtual reality stage that may quite literally blow you away.

Megadeth aren’t a band known for their delicacy and sophistication. Actually – it’s pretty far from it, but it appears that the virtual reality Dystopia will happen. This isn’t the first time, however, that the band pushes into the area of new technology – as they’ve always been pioneers of new music equipment. Still – it is the first time we see them going as far as virtual reality. As Dave Mustaine, the band’s frontman, leader, founder, and main songwriter has to say – this is the first time that a band in the genre of heavy metal enters the extremely promising field of VR.

The band’s new album – Dystopia – will be launched January 22, and will be one of the band’s few concept albums. Fans of the genre already say it will be a promising album. Back in 2014, Megadeth went through rough times with a show in Tel Aviv being canceled due to the armed conflict in the region. Later that year, longtime drummer Shawn Drover and guitar god Chris Broderick both quit the band, with the cited intentions being to “pursue other musical interests.”

Megadeth fans did not fear any major breakup would occur, as the band is notorious for its lineup changes, the only original members being Dave Mustaine himself and bassist David Ellefson. The latter also left the band for long periods of time, at one point even suing his former bandmate in a process that was eventually settled out of court.

After such a strange and complicated history, it’s easy to see why the fans would not be surprised. However, they stand to be shocked at the content the virtual reality Dystopia songs will bring. The song videos will be made in collaboration with director Blair Underwood and will feature the following songs off of the new album: Dystopia, Fatal Illusion, The Threat Is Real, Post-American World, and Poisonous Shadows. Of these five, the second one already has a music video, albeit not in virtual reality, which you can see at the bottom of this article (WARNING: the video is particularly gory and some viewers may find it disturbing).

What is uncertain is exactly how they will go about shooting these videos.

For a band so fraught with intrigue, Megadeth is known to transpose its tense internal situation well into its music. In fact, it’s become something that fans have come to expect. And the new album Dystopia does just that. Although we won’t go into nitpicking personal references from the album’s lyrics, it’s interesting to see how virtual reality fits into this whole fallen society idea of Dave Mustaine.

It’s important to note that Mustaine has always had a soft spot (if one can call it that) for dystopic narratives. Speaking about a previous album (Super Collider), Mustaine said that he’s always liked the writing of George Orwell, Nineteen Eighty-four in particular and that he was probably influenced by the “riveting” text in more than one song. It’s possible that he was already toying with the idea of making a whole album based on the concept of dystopia. In this fabled post-American world that Megadeth’s new album delves in, society has taken the form of extreme socialism, wrought by a secret and oppressive police force. The story’s main character – Megadeth’s own mascot, Vic Rattlehead, is hunted by the system for being a nonconformist, an individual that, in a very teen-angst way, refuses to conform to the strict norm imposed by society.

Besides this underlying story, the narrative is also driven by a revenge love-story. Vic appears to either be extremely friendly or be romantically engaged with an android that looks very much like a twisted version of Lady Liberty. In the video below, she appears to be killed by the system’s security force, leaving Vic shocked and grief-stricken. Already we see the plot as being full of dark metaphors, disturbing images of a society gone wrong, and a captivating story surrounding Vic. What will happen next is relatively easy to deduce: Vin will probably go on a rampage against the system. However, we will have to wait for the virtual reality Dystopia music videos to see this narrative through.

Megadeth have not made it clear which devices will be able to run the virtual reality experience. We assume that it will be available for all major platforms. In fact, with YouTube now supporting 3D videos, it may well be a simple release on their YouTube channel. Needless to say, it doesn’t matter which device fans choose to watch from – be it an Oculus Rift, a Gear VR, or even an HTC Vive, the experience should work fine on all of these. However, to make sure their fans have one sure way to experience the video Megadeth will also be shipping CEEK Cardboard – a virtual reality headset similar in fashion to Google Cardboard. The headset will only be available to those who also purchase a full, physical copy of the album.

Be it a broken bridge symbolizing the rupture between the society’s rulers and the population, or the bodiless head of a twisted Lady Liberty symbolizing the oppression of this society, this album is already set out for awesomeness. It may well live to be one of Megadeth’s best efforts. Judging from the currently released single, fans of the band are in for a real treat: the virtual reality dystopia, the aggressive, punching beat, the somewhat poetic nature of Mustaine’s lyrics – all true fortes of this album.

WARNING: The following video may seem a bit too much for some users. If you have problems with blood-and-gore images, we advise against watching this clip.