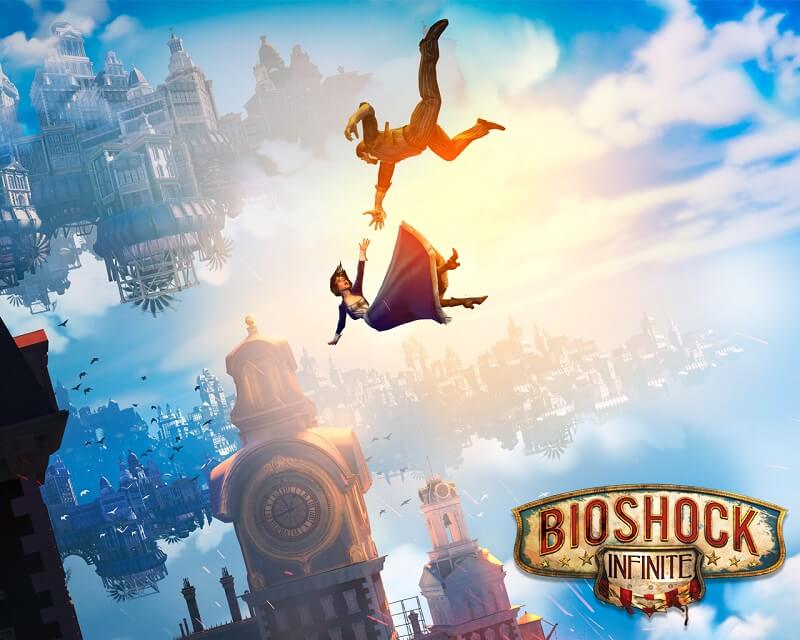 BioShock Infinite is a first-person shooter, the third in the best-selling series from Irrational Games. This iteration of the series places players in the shoes of a man who is attempting to pay off a debt, sent to a city above the clouds to discover a world that he could never imagine. Along the way, players develop amazing powers, make moral decisions, and delve deeper into the metaphysics that unite the world of BioShock. A best-seller, this game both wraps up the BioShock series and serves as a new launching platform for future games. The game was critically and commercially successful upon release.

BioShock is one of those series that you’ll be considered lucky to experience from the beginning. By now, almost everything from the series has been spoiled, remixed, and copied by other developers. From the morality system to the weird metaphysics of the story, this isn’t a series that breaks ground for players who are late to the game – it’s a series that created the framework they’re already used to playing in.

If you jumped into BioShock from the beginning, though, you’ll remember that it wasn’t like anything else out at the time. It was a console shooter, sure, but it was a shooter with a soul. It featured RPG mechanics, a story that branched based on a few key choices, and a world that was more richly detailed than anything else out there. It’s no wonder, then, that the series became such a hit.

BioShock Infinite abandoned the world of its predecessor, but only in setting. It is a BioShock game through and through, presenting players with a world that’s based on our own, based on real ideologies that are dialed up to eleven. What few expected from this game, though, is that it would be the series’ swan song. Not long after Infinite released, Irrational Games shut its doors. There will be no more BioShock, at least until the inevitable reboot.

For now, we’re left wondering if this was the note on which the series should have gone out. It’s the job of our BioShock Infinite review to answer that question – and for players, ultimately, to answer themselves.

One of the typical points of praise in a BioShock Infinite review is the setting, and it’s well-earned. Columbia is amazing. It might not have quite the ‘wow’ factor that was present during the first descent into Rapture, but it’s still an absolutely amazing bit of design. It’s not just the way it’s set up for play, either – it’s how every aspect of the design comes together. From the ambient sounds to the little easter eggs in the background, it feels like a living and breathing place. Columbia absolutely feels like a city that could have been.

The storyline is also amazing. BioShock has always been a shooter that’s tended to put story first, and Infinite follows that formula. After playing the (virtually) nameless protagonists of the first two games, it’s astonishing to get a protagonist as deeply developed as Booker. Elizabeth is also a revelation, especially if one pays attention to what’s going on in the game. The best character, at least early on, is the city of Columbia itself. It absolutely captures the essence of early 20th-century Americana, for both good and ill. You’ll care about what happens to the place – even if you really shouldn’t.

It’s hard to pinpoint what we don’t like because the biggest things we dislike feel like they can’t be fixed within the framework of the game. Simply put, BioShock Infinite is a game at odds with itself. The story doesn’t work with the bloody carnage of the gunplay, and you’ll often find yourself annoyed to have to go through another shooting gallery in order to progress the plot. The problem is that the shooting isn’t bad – you really can’t complain about the combat here, as it’s a good deal of fun. It just doesn’t work with the story Irrational wants to tell.

Beyond that, there are just a few sections of the game that are a slog. You’ll do some backtracking in order to accomplish a goal or two and you’ll interact with some characters who really feel like they don’t have any bearing on the plot by the end of the game. All of the interactions are great and all of the missions are fun, but you get the sense that Irrational could have tightened up a few things in order to make the game better. It feels like some things were left on the cutting room floor in order to “gamify” the rest of the content.

We played through this BioShock Infinite review on the PC, so it’s probably a good idea to let you know what you’ll need to do the same. BioShock Infinite doesn’t require quite as robust a machine as you would have needed back upon its release, but you’ll still want something relatively quick to get the most out of the game. Minimum PC specs call for a 2.4GHZ processor, 2GB of RAM, and a Radeon 3870 with 512MB of RAM to run. You can push that up to a Quad-Core processor, 4GB of RAM and a 1024MB video card if you want to hit the recommended benchmarks.

We played through this BioShock Infinite review with an XBOX One controller, and we recommended that you do so as well. BioShock just feels better to us with a controller. Note that this game is also available on XBOX 360, XBOX One, Playstation 3, and Playstation 4 – you can pretty much be guaranteed to find a platform and control scheme that will work for you.

During our BioShock Infinite review, we were often saddened by the reminder that this is the last BioShock game for the foreseeable future. It’s a fantastic game, though one wonders what might have been. It’s definitely worth playing, if only to experience the story. It may be far from perfect, but it is still the kind of game that you’ll find yourself discussing years after you put down your controller. Agree with us? Disagree? Let us know below.