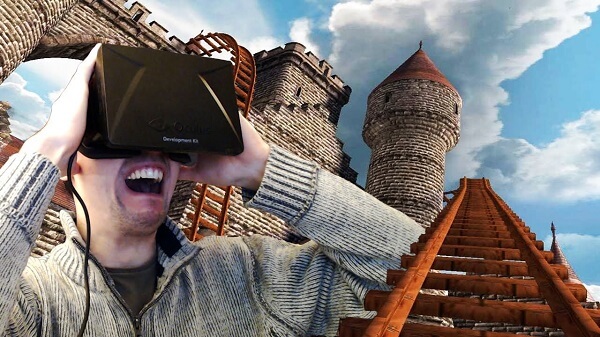 One of the major selling points of virtual reality is that it makes users feel like they’re somewhere else. While you can visit fantasy worlds on many other platforms, virtual reality gives you a unique way to visit something a little closer to home – the humble roller coaster.

Atlantis does something with roller coasters that no real coaster can do – it changes up the track every time you play. While this Oculus Rift roller coaster game is technically still listed as a demo, it gives players a fantastic view of ever-changing cityscapes while they go up and down across randomly-generated tracks.

While Atlantis isn’t the deepest game on the content front, it’s still a blast to ride through. It’s certainly one of those games you want to show people who are new to VR.

Amazingly, there are already remastered games coming to the Oculus Rift. This game is an update of one of the best-regarded demos in Oculus history, so it earns a spot even though it’s a very new release. It’s a great rollercoaster game from a great developer, and definitely one of the most realistic experiences on the Rift.

Given how fantastic this game performed as a demo, it’s no surprise that it really pushes boundaries as a full game. If you’re looking for an Oculus Rift roller coaster that will give you a completely immersive experience, this is where you should start.

One of the great things about VR is that it can take you places a real coaster can’t go. InMind ditches the fantasy coaster theme for a journey through the human brain, giving an up-close view at the most important part of the human body. While the game itself is fairly short, it’s still quite beautiful.

The publisher might be better known for its strategy games, but this is one deep dive of an Oculus Rift roller coaster that’s really worth your time.

Sometimes, it’s nice to get a quick roller coaster experience that won’t break the bank. Priced at under a dollar, Cave Depths gives you just enough Oculus Rift roller coaster fun to be worth the price. It’s definitely a step up from some of the free models available for the cheaper headsets, but it’s still a relatively short experience.

Cave Depths is a fantastic way to show off the power of the Oculus Rift, though, and more than worth a go or two at its price point. While most developers might stick to something a little less flashy as a proof of concept, it’s nice that these developers really put together something fun.

If you’re a gamer, you’ve probably already played a fair number of games on the Unreal Engine. The Unreal Engine 4 Coaster looks just as amazing as any of those games, with a level of graphical fidelity you just don’t see on VR titles.

This might not be the best coaster game in terms of motion, but it’s absolutely one of the best titles out there. Unreal Engine 4 is just an amazing development tool, and hopefully more titles will look as good as this one.

Sometimes, developers knock it out of the park by doing something a little different. Lava, Inc is a coaster that prominently features lava. It’s also the rare VR coaster where you control your movement.

Leaning forward or back allows the player to control the speed. That means there’s much more time to enjoy the scenery or, if you’re a thrill junky, a sense of challenge to completing the coaster as quickly as possible. Definitely a real winner.

Influx is another great, free coaster game built on the Unreal 4 Engine. This one takes you deep into a fantastic version of the bowels of the Earth, allowing you to whip through caverns at high speeds.

Influx Volcano Coaster is an amazing experience, especially for a free game. Given the price, it’s something that no Oculus user should be without.

While most of the games on this list take players to fantastic locations, Helix brings players to a real rollercoaster. Based on a ride in Liseberg Amusement Park, this is as real as it gets. In fact, it’s so real that the game has been worn concurrently with the ride.

If you’re looking for a chance to jump on a real coaster from the safety of your home, Helix Rollercoaster is the game for you.

When it comes to VR coasters, No Limits 2 is the king. This isn’t just a game that lets you ride recreations of some of the best coasters out there – it’s also a fully-featured game that allows you to design your own Oculus Rift roller coaster.

Fully PC compatible, you can do all of your design work on a monitor and then test out your creation on your Oculus Rift. This is a game that delivers on the promise of the genre, and it’s so good that real rollercoaster designers have used it for development.

All of the games above represent the best of a growing genre. Roller coaster games are a natural fit for the Oculus Rift, and they’ll only keep improving from here.