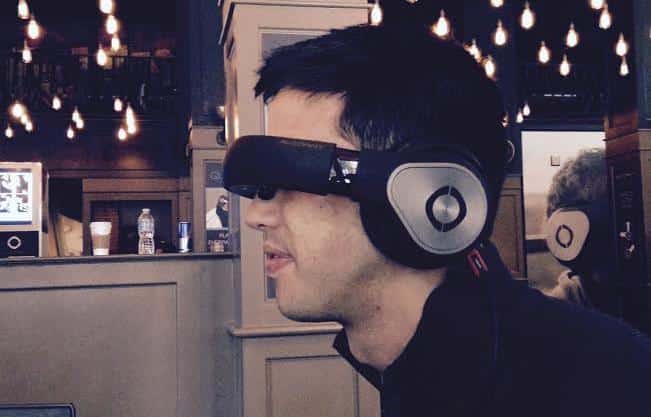 It’s safe to say that the Oculus Rift, Project Morpheus, Google Glass and many other augmented and virtual reality devices are beginning to fight over who gets to amaze our retinas. And now, the Avegant Glyph is among these devices after the successful campaign on Kickstarter in January 2014 with which the company was able to raise a whopping $1.5 million.

We already saw the device at the 2014 edition of CES and this year the developers of the Avegant Glyph presented a new generation of the gadget. But to be completely honest, apart from some engineering and design tweaks, it’s pretty much the same thing we saw last year. The Avegant Glyph is essentially a pair of headphones (a pretty big one) that you can put over your eyes and take pleasure in your own private entertainment device.

While VR headsets like Project Morpheus and the Oculus Rift are made to isolate you from the world around you, creating the illusion that you’re somewhere else, the Avegant Glyph lets you take peaks at what surrounds you. This means that the device lets you read messages you receive on your smartphone and even take a sip out of your drink.

The downside to this, however, is that the device is nowhere near as immersive as a virtual reality headset and it’s built more to just view single-pane, stationary content, kind of like those you would watch on a normal display. 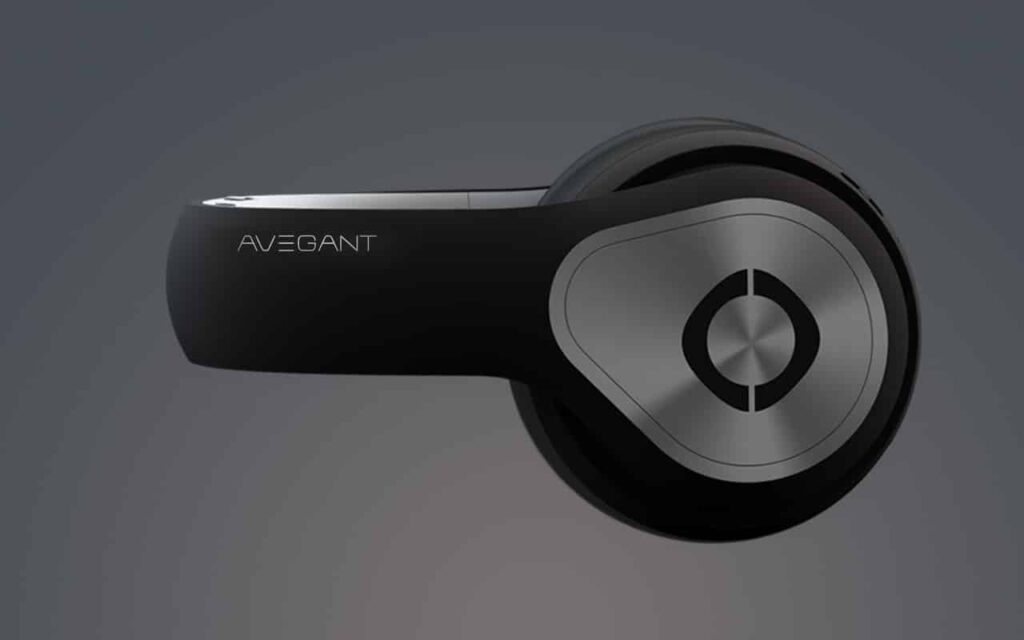 The device is capable of head-tracking and the company did reveal to us a pseudo-VR 360 degree photo. But this also makes you feel like you’re watching a regular TV strapped on your head than being in a virtual reality world. An important aspect of the Avegant Glyph is one that plagues other virtual reality headsets as well.

It’s greatest when you’re on the go (like on public transportation or in an airplane) but these are the scenarios where you will get the most stares from people. The difference is that you will be able to see people staring if you peak over or under the goggles, unlike the Oculus Rift or other virtual reality headsets where you could at least ignore those stares. 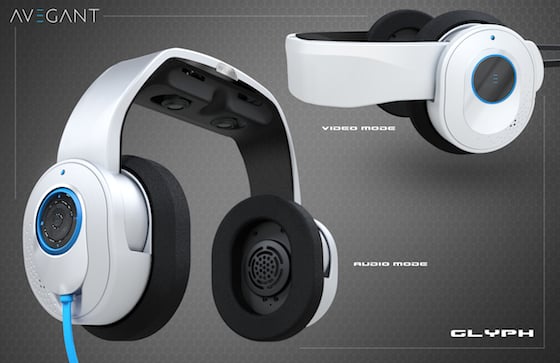 This thing could change with the time as people will begin to accept these kinds of devices but if there is something that Google Glass taught us is that wearable gadgets on your head (eyes) look extremely awkward in public. Virtual and augmentative reality headsets will have a hard time catching on to people. It’s going to take a while for people to start getting used to others wearing these, let’s face it, ridiculous devices on their heads.

Even over-sized headphones draw the attention of people when you use them, what would you expect to happen if you wear a VR headset? Even if you don’t care how you look in the eyes of people, most of us don’t like to draw unnecessary attention on ourselves. This is especially true when we become the topic of conversation of the people around us. But enough about how the device looks, we should get back to the point.

The Avegant Glyph we saw is a prototype that features the final design, mechanical structure and optics. It was also adjustable and fully functional. It’s possible that a few aspects about the headset will change but this remains to be seen at a later time in development.

The model we tested had some cables that were exposed in the headband and the nose pads on the device were just temporary and their design will evolve into something that will accommodate a broader variety of noses. The company said that it will also include something that will cover the lenses for when people will use the device as regular headphones, as (it’s best not to forget this) it can also be used like that.

But what about the primary use of the Avegant Glyph? Well, that’s actually up to you and your preferences. The Avegant Glyph is pretty much unique on the market right now. There are other video headsets, such as Zeiss’s Cinemizer and the Fat Shark, which seems to be very popular with people that fly drones.

There are also numerous virtual reality headsets coming, such as Sony’s Project Morpheus and the Oculus Rift but Glyph kind of stands somewhere in the middle of these two kinds of devices. You can connect an HDMI source to it and use the Avegant Glyph to watch a movie from pretty much any device that supports this kind of connection – even some smartphones.

The Glyph is also capable of head-tracking which means it can be used to “travel” inside 360 degrees photos and photospheres and 360 degrees videos. I tried these features and, to be completely honest, they got me pretty excited. This is because this kind of experience is pretty new for most of us, or at least for me.

Possibly the best trick Glyph has up its sleeve is the way it delivers the visuals to you. The device doesn’t use small OLED or LCD displays and instead relies on a technology called micro mirror projection. This means that the image is projected into your eyes and, to be fair, it works pretty great. The result is an incredibly crisp image. 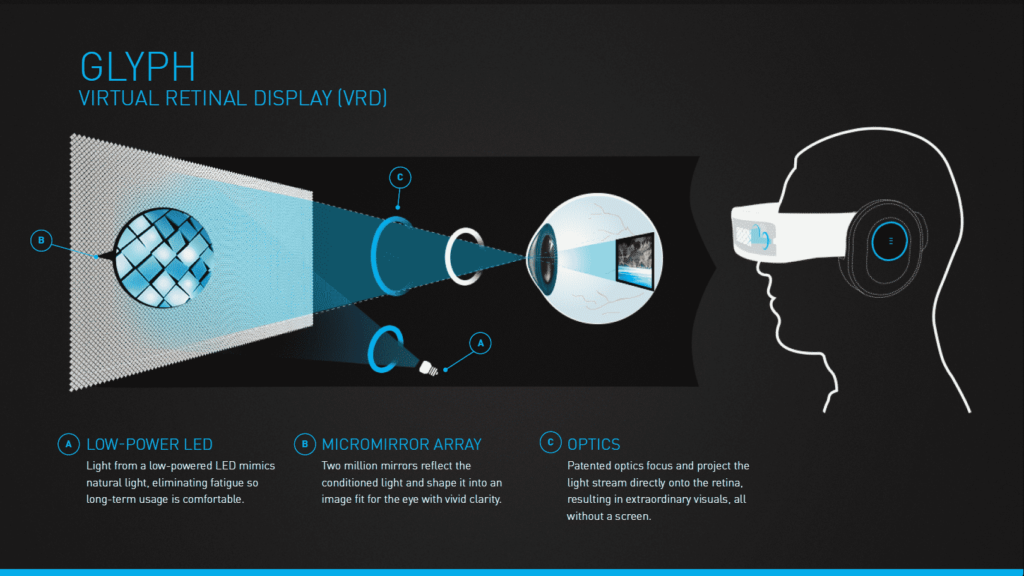 It’s definitely the most detailed one I’ve seen on a headset of any kind. While the field of view isn’t all that great (around 45 degrees), it’s perfect for watching movies. Avegant is also working on another more immersive experience called the Jellyfish and we also got to test that at CES. However, the Avegant Glyph is manufactured for media usage and its field of view is just perfect for that.

It’s also a plus that you can see the world around you when you use the Glyph, unlike some other of the Latest Virtual & Augmented Reality Devices, which means that you can also enjoy a drink while watching a movie or comfortably take a look at your keyboard when playing a game.

It’s possible that the Glyph’s biggest downside in the eyes of people will be its awkward design. The device is pretty much a pair of headphones that have optics in the headband. The idea is that you can use this device as a normal pair of headphones which you can drop on your eyes when you want to enjoy a movie.

The device does take a while to get used to and the first time I put the Glyph on my head I spent a little while trying to adjust and get used to it. But once the Avegant Glyph is in position the device is quite comfortable and gives a pretty enjoyable experience.

The Avegant Glyph is pretty much a portable media center that is powered by batteries. You can enjoy anything from video games, music and movies to (a lesser extent) virtual reality on it. It’s a pretty weird device but I was definitely impressed by it.

Its biggest negative aspect, in my opinion is the $600 price point but if consumers will get over the steep cost of the device they will surely find that the device is more than worth the money. Sadly, there are cheap VR device versions on the market and this might prove problematic for Avegant Glyph.